After being foiled by the weather since the beginning of November in my attempts to complete a winter bird survey at Blakenhall Moss, I finally managed to get it done a couple of days after Christmas.

I do these surveys for Cheshire Wildlife Trust (CWT) at their Blakenhall Moss and Bagmere reserves and need to make at least two visits to each site over the course of the winter; one in November/December and the other in January/February. I did the first Bagmere survey on 1st November in a short weather window but there hasn’t been any suitable weather (dry and still) since or at least on days when I’ve been free. 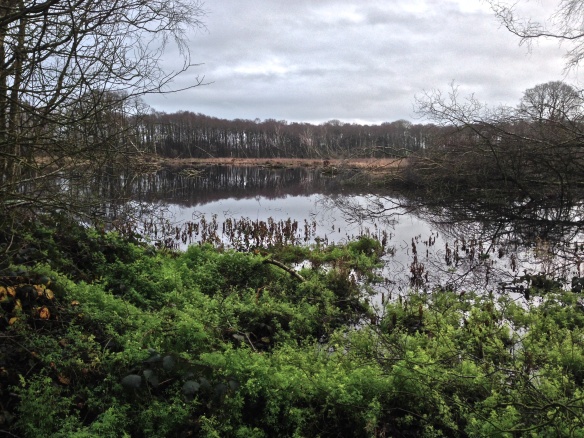 The last breeding bird survey visit I made to Blakenhall was back in May and the site has become even more overgrown by brambles. The reserve sits in a large depression in the Cheshire countryside and the Wildlife Trust has cleared the woodland from the site, except for a narrow band of trees around the boundary. The drainage ditch from the site has also been blocked and the water levels have now risen. This has left only a relatively limited area through which the bird survey can be undertaken, in a large loop through the remaining woodland. However, the bramble growth and the higher water levels made the survey very difficult and I spent more time bashing through the brambles and wading through the water than actually observing and listening for birds. Some parts of the survey route are now almost impassable and I suspect that the next year will see the brambles blocking the survey route altogether.

Despite the difficulties getting around the site, I did manage to complete the survey, although I suspect the disturbance I caused getting around may have distorted the findings. I recorded 21 species including three of particular interest. I found marsh tit and and lesser redpoll, two red-listed species, and a good-sized flock of teal. The teal first wintered at Blakenhall last year, following the raising of the water levels and the flock has returned but is now slightly larger.

Another positive finding was that the invasive species work that I’ve done at the site with Crewe & Nantwich Conservation Volunteers (CNCV) has been a success. There were several areas of the site that were overgrown with rhododendron and several visits were made to clear the largest of the areas of this non-native species. After a full growing season since the area was cleared, I found only a small amount of regrowth and this could easily be removed with one further visit (maybe some of the bramble could be cleared at the same time!).

A small amount of rhododendron re-growth

Whilst not necessary, I also took advantage of the weather window to do a second November/December survey at the Bagmere reserve and it was well worth it. It has been quite concerning that during the past 12 months willow tits haven’t been recorded at the site. Over the course of the year I have done seven surveys at Bagmere and undertaken several tasks with CNCV but haven’t recorded these birds during any of those visits. As I was on the return leg of this survey, having made my way to the far end of the site, I stopped to watch a small roving flock of birds. Amongst the blue tits and a goldcrest were two other birds but I couldn’t confirm what they were to begin with. Marsh tits and willow tits are virtually identical and I find it impossible to visually tell them apart, however, they make distinctly different sounds. After waiting for a while one of the birds made its harsh call which made it immediately recognisable as a willow tit – they’re back! 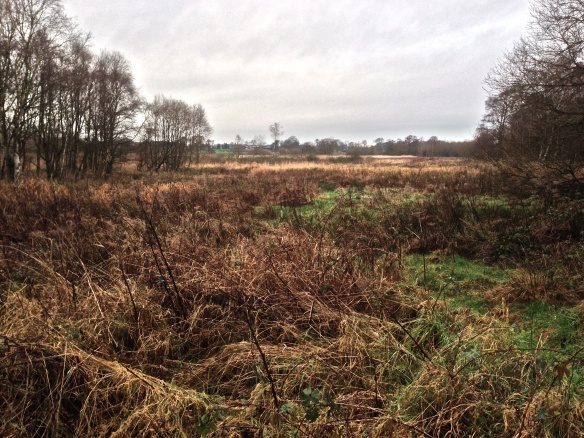 The previous recordings I have made of these birds at Bagmere have been made easy by their willingness to make their calls but perhaps they’ve just been a bit quieter than usual over the past few months and I need to take more time during surveys to ensure I don’t miss anything.

Well, that’s it for my surveys in 2015 (breeding bird surveys and winter bird surveys at Bagmere and Blakenhall for CWT and a breeding bird survey near Bulkeley and a House Martin Survey for British Trust for Ornithology; and a cliff-nesting bird survey by jet-boat with the RSPB) but there will be more to come in 2016. Hopefully these will include surveys of the house martin nest on my house – it’ll make a change to do surveys from a seat in my back garden rather than bashing my way through brambles and wading through flooded bogs!

Today was the Christmas Task for the local conservation group I volunteer with and like last time out we spent the day at Wybunbury Moss National Nature Reserve. 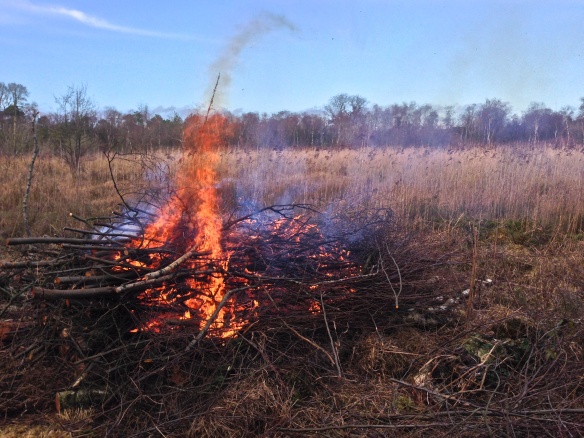 Today’s task was to make good use of the burning platform that we built from logs a fortnight ago.  Natural England has been working at the site over recent weeks and our task was to burn the brash left behind by the tree removal operations.

It wasn’t all work and at lunch, with the fire having burnt through most of the brash, it was time to get stuck into the Christmas food.  Soup, potatoes and mince pies were followed some time later by the sausages I cooked over the hot embers of the fire. 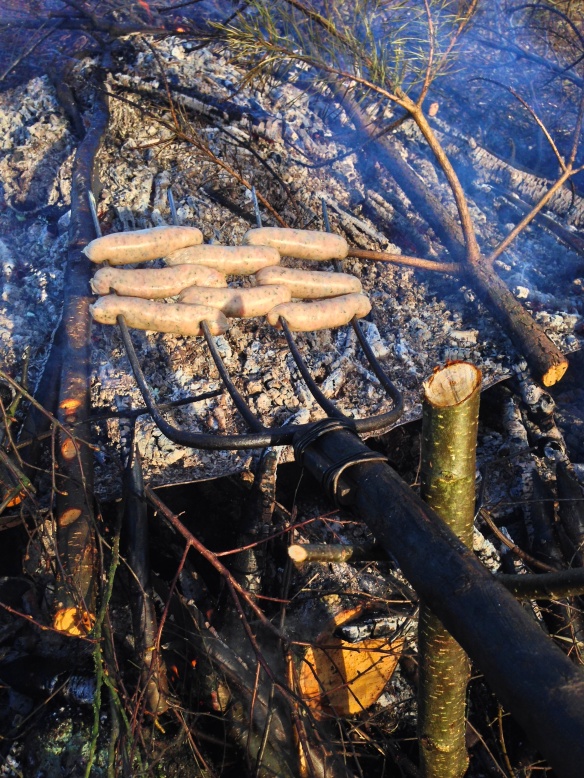 To finish off the day we had (non-alcoholic) mulled wine and chestnuts roasted over the last of the fire’s heat – proper Christmas food – and all consumed under a rare clear and bright blue sky.

George Monbiot gave an excellent talk at the UK National Parks Conference 2015.  In the video of the talk below, he really shows just how wrong the management of our National Parks is and how this needs to change.

It’s not a short video but well worth a watch.

I spent today with CNCV working for Natural England at Wybunbury Moss National Nature Reserve.  Whilst I often go for a walk on the footpaths and permissive path around the outside of the Moss, today was a rare opportunity to spend time out on the Moss itself. 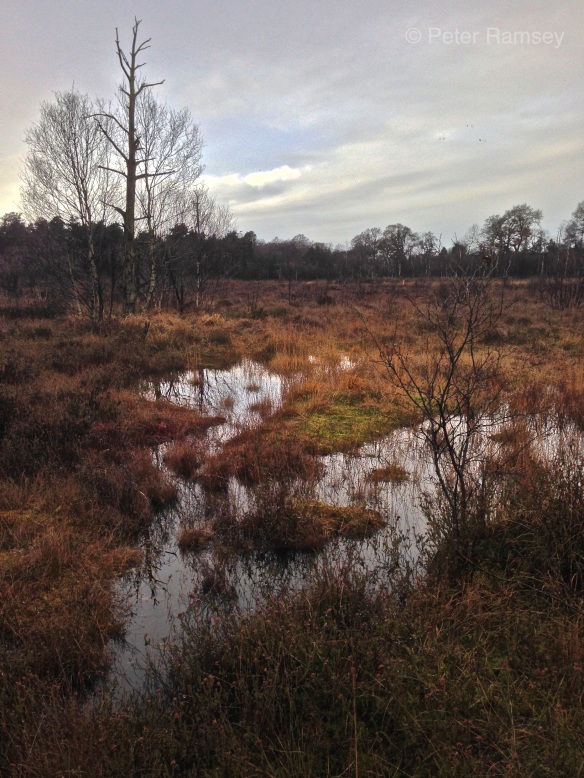 Natural England employed us to thin the woodland cover on the edge of the Moss, taking out birch trees and using the large logs to build a fire platform.  Natural England has been much of the woodland thinning itself, so our task in two weeks time will be spent trying to burn as much of the brash as the fire will take.  Our next outing will also be our Christmas task – everyone chips in with some festive food and we use the fire to heat it, while keeping ourselves warm too.

Whilst today’s task wasn’t particularly cold to begin with, the driving rain in the morning soaked us and by mid-afternoon everyone was starting to feel the chill – an early finish was certainly welcome!

Working on the Moss itself is a real privilege as there is no public access to  the site due to the dangerous nature of the ground. Under as little as a metre of moss and peat, lies a lake which is up to 12 metres deep – walking across the Moss, the surface moves and ripples.  If it wasn’t for the odd house or two visible from then centre of the Moss, you could easily think you were standing in the middle of a wilderness area – it’s quite a special place.

A couple of weeks ago I had a weekend away in Lincolnshire and on one of the days I went for a walk at Gibraltar Point, one of the local Wildlife Trust reserves.  While I was there, walking along the beach, I came across hundreds, perhaps thousands, of washed-up starfish.  It was a sad sight on what was otherwise a beautiful walk along the sands.  It was a typical autumnal day with a keen wind and dark clouds threatening to deliver their load at any moment, the rain held off for a while but eventually soaked me.  Despite getting very wet, it was a lovely way to spend an afternoon.

When I got home at the end of the weekend, I looked up what could have caused the mass washing-up of the starfish and came across a newspaper article from nearly three years ago – another similar incident not far north up the coast.  I was worried that this might have been caused by man but it appears it was probably just the result of bad weather.