An after work visit to a nature reserve (RSPB Frampton Fen) and saw a bird species for the first time (a ‘lifer’ as twitchers would call it).

Having my tea in the kitchen with the door open listening to the birds – song thrush, blackbird, dunnock, woodpigeon, swallow, magpie, house martin and greenfinch.

Second and final Breeding Bird Survey visit to my Bulkeley grid square – and what a morning for it! 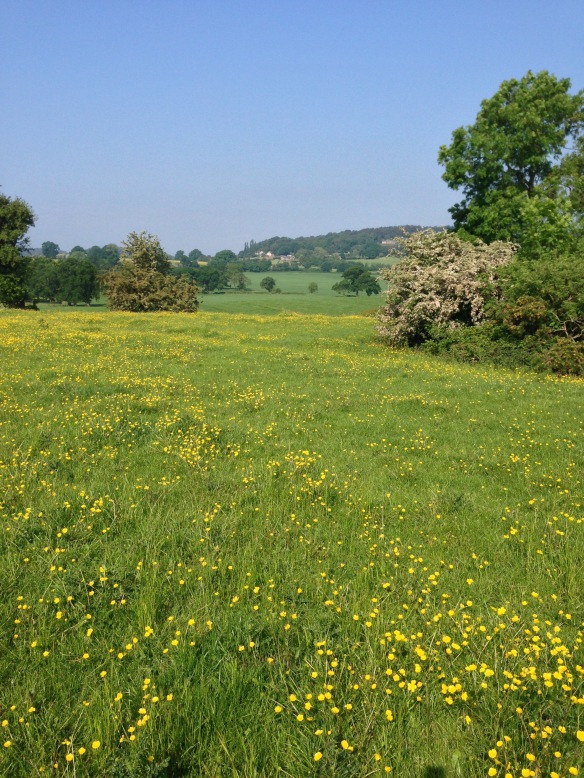 Wildlife at the cricket – feral pigeons and swifts.

I’ve just returned from a trip to Finland with Naturetrek to watch European brown bears in the wilds of the north. The title of the trip was ‘Finland – Just Brown Bears’ but I think this is entirely misleading; there was nothing ‘just’ about it!

After missing out on seeing brown bears on what was an otherwise brilliant ‘Sweden’s Mammals’ trip with Naturetrek a few years ago, I felt somewhat deprived, so I booked this short three-night to make up for it. This is the first organised wildlife trip I’ve taken in a while and it showed what I have been missing.

I had an early wake up on Thursday morning but this was made easier by a smooth transition through Heathrow Airport. Two pleasant flights later (being grilled about Brexit by a nice Finnish lady for the entire second flight), our small group of five met up for the first time with Jarno, our tour leader.  Departing Kajaani, we had our first views of Finland on the two and half hour drive to the home for the next three nights, the Martinselkosen Wilds Centre.  The Centre is just two kilometres from the Russian border and about half way up the county on the opposite side from Oulu. 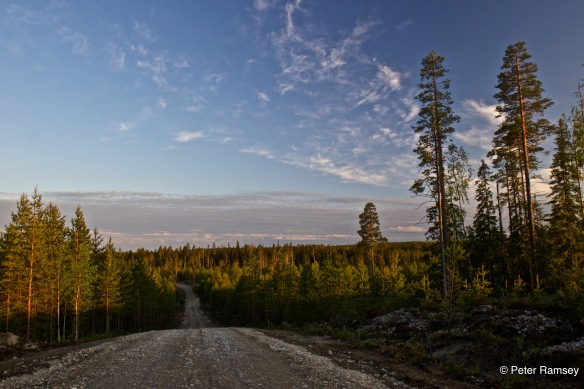 Having visited Sweden so many times over the past 15 years, the Finnish landscape was very familiar in many ways but much more wild and remote than my usual Swedish haunts. The land is a mixture of forests, lakes and bogs and there was very little else on route. On arrival at the Wilds Centre I was very pleasantly surprised by the standard of the accommodation. We all had rooms in the annexe to the main building; clearly a recent addition with seven modern, clean and airy twin ensuite rooms – all very typically Nordic!

After a nice evening meal, we all went off to separately explore the area making use of the gravel roads and forest tracks.  The evening was so light and the sun didn’t set until 11:00pm although that didn’t seem to make much difference to the light levels and it barely seemed like dusk when I finally got my head down at around 12:00.

I woke to a startlingly bright day with deep blue and almost cloudless skies; the weather didn’t change from this for the rest of the stay – amazing! It was time to settle into the dining patterns for the next few days; a breakfast at 8:00 (porridge with jam and then bread, cold meats and cheeses) and a two course lunch at 3:00pm followed by sandwiches and biscuits during the evenings in the bear hides.

Breakfast gave us a first sign of the local mammals with red squirrels on the bird feeders outside the dining room window accompanied by a few bullfinches. Afterwards there was time for some more local wanderings before Jarno picked us up for a guided drive around the forests surrounding the Centre and then further afield. Along the way we saw bear scat, the last furry remains of a wolf-killed reindeer and looked in an old tree stump for owls (one wasn’t home that day).  We moved on to a birdwatching tower next to a large lake where there were excellent views of wildlife including crane, cuckoo, little gull, bean geese and whooper swan. Moving on we came to another large lake and had our first views of (living) reindeer plus a distant osprey and a couple of black-throated divers.  On the way back to the Centre we had a brief view of a larger herd of reindeer, hidden away across a bog and behind trees.

It was lunch on our return and afterwards we had a quick turnaround to get ready for our overnight stay in the main forest hide; hoping to get our first views of brown bears. However, we didn’t have to wait until we got there for our first view! Walking the 1.5km out to the hide, along first trails, we were startled by a mother bear and two cubs as they ran across the path in front of us. She stopped only 20 metres from us, turning to face us and standing on her hind legs, hurrumphing at us before turning and disappearing into the forest, followed by the cubs. I have to say she looked rather big standing so close to us with nothing in between but fresh Finnish air; earlier in the day I had a real sense of being out in the wilderness, this really brought it home!

Moving on we soon came to the forest hide, where more bears were already waiting in amongst the grass, rocks and trees. We quickly settled in, not wanting to disturb the bears too much with our presence. Again I was pleasantly surprised by the accommodation – a well-constructed, spacious wooden hide with comfy chairs and bunkbeds for all. The windows were large enough to give good views but without showing us too much to the bears and there were material covered gaps for camera lenses to be put through. Even the compost toilet was ‘nicer’ than expected and the window could have given a most unusual and memorable view to accompany that normally mundane activity!

The entire 14 hours in the hide made for one of the most unforgettable wildlife experiences of my life. There were very few minutes for the whole time when there wasn’t a least one bear to be seen and at the most spectacular there 16 of the beasts out there at one time! Most of the bears were in family groups of a mother and two, three or even four cubs. There were also adolescents who had recently separated from their mothers and most cute of all, two of this years very small cubs who made a very fleeting visit.

There was always a sense of tension between the bears while feeding on the meal left out for them, usually mothers wary about others getting too close to their cubs but early on a large male made a short, passing visit which sent most of the others scattering. However, it was much later in the evening when all hell broke loose as a male visited again and walked straight through the gathering in search of a receptive female. Most of the mothers and cubs ran off in all directions whilst other cubs shinned up trees like lightning. The male only had one thing on his mind and soon wandered off to continue his search. 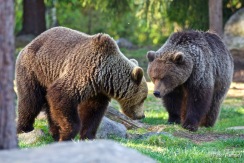 Eventually we all retired to bed but with light in the sky all night it was easy just to lie on the bunk and watch the bears outside. Waking after only a few hours sleep (who could sleep properly when there were bears to be seen!), there was just a little time left to watch the animals moving around in the first rays of the dawn-breaking sun before we had to set off back to the centre for breakfast. 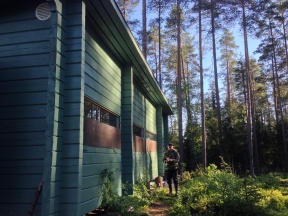 After a good feed, we went out for a boat trip on the nearby lakes, using almost silent electric motors to power us across the mirror-like waters. After just a few minutes, we saw a mother bear and cubs on a far off bank, who immediately ran off as soon as she saw us – another wilderness view to be remembered. We pushed on around the lakes, going through some narrows where the short distance between banks presented an opportunity for bears to cross, the animal-made paths easy to see on each side. Soon a watchtower came into view, a sign of just how close we were to the Russian Border, but thoughts soon returned to wildlife with a great view of a black woodpecker at the top of a dead tree. We eventually came to a narrow ridge between two bodies of water and got out of the boat to look for more signs of bears, finding hairs caught on undergrowth and tree bark ripped by large powerful claws. Returning to the boat, we floated back to the start across the still flat calm lakes and returned to the Centre for lunch. 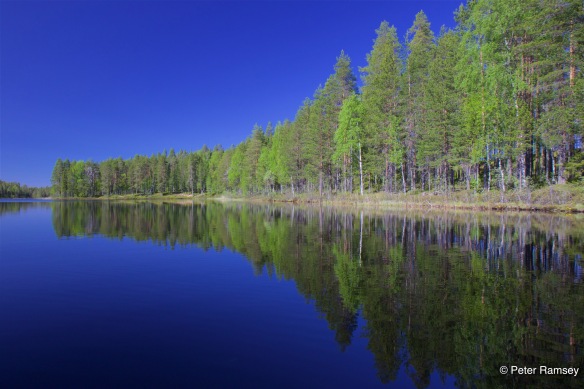 It was soon time to head out for a second but shorter visit to a bear hide. We went to the evening hide, a little distance away from the previous location but in a different setting. Instead of nestling within the forest, it sat out on the swamp with grassland and scrub as a background. Whilst there weren’t as many bears, seven over the course of four hours, the setting seemed more wild and the rich evening light provided great conditions for photographs. The bears were quite obliging with close views and the sight of another very large male at eye level was quite unforgettable. However, it didn’t seem long until we had to make the trip back to the minibus after the final evening with the bears, back along the path through the forest looking out for any unexpected sightings in the still good light.

After the memorable previous couple of days, it was sad to make our way to Oulu Airport in the morning straight after breakfast. The journey made some more memories, however, with a few sightings of reindeer on the roadside as well as a couple of female capercallies. The group said goodbye to Jarno who had led us so well during our stay and made our way into the nice modern terminal and on to our flight home via Helsinki.

Overall, over the course of the trip we saw brown bears a plenty, a good few reindeer, red squirrels, a mountain hare, signs of beavers and a muskrat holt, over 50 species of bird and grand northern wilderness landscapes – this trip was anything but ‘Just Brown Bears’.

Listening to bird song as I start a day working from home.

Looked for wildlife on my train journey to work.