Today, I had another day out with Crewe & Nantwich Conservation Volunteers on a task at Wybunbury Moss.  We continued with the job of removing trees and spent the day cutting down birch saplings and burning them at the edge of open Moss. 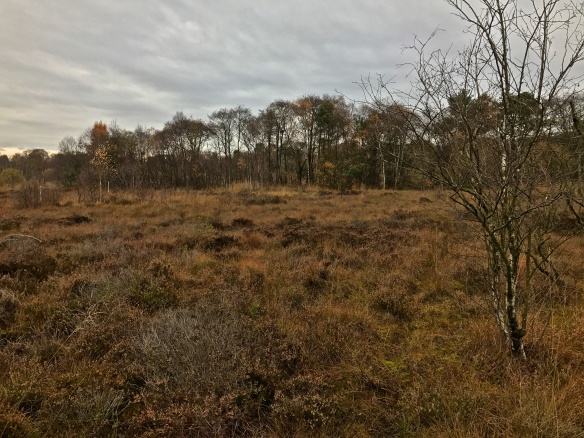 The task was made more difficult by the problems we had getting the fire started.  We had a good base of old tree trunks and some cardboard boxes to keep the bottom of the fire dry while getting going.  With firelighters, kindling and a bag full of my shopping receipts, the fire started straightaway but we couldn’t get it roaring.  The brash from cutting down the saplings burned far too quickly and left only light ash, so we cut down a couple of medium-sized birch to give the fire some more substantial wood to go at but none of this would catch properly while the fire burned straight through the light brash.  The conditions seemed quite good for a fire – it has stopped raining and there was a light breeze to feed the fire with air – but we couldn’t work out why the fire wouldn’t roar as usual.  It was only when we got stuck into some larger saplings that the mix of brash and thicker trunks, after at least a couple of hours of trying, that the fire started to burn well.  It seems that each autumn we have to re-learn the techniques of building a good fire all over again.

It was quite a gloomy and moody day for most of the task; we still have a month to go to the shortest day but it seemed like we were already there.  However, the day was brightened by two skeins of pink-footed geese flying over the Moss, probably on their way east to Norfolk for the winter. 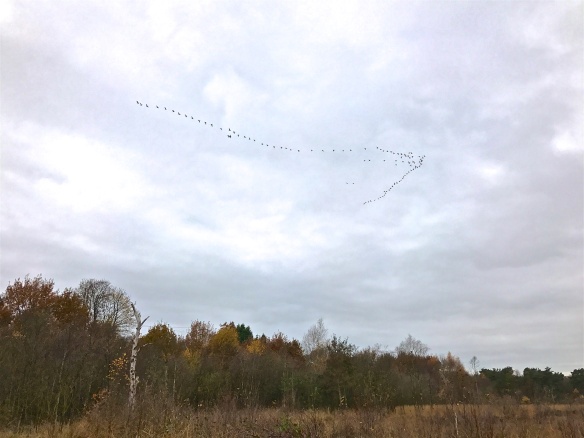 With a spare bit of time this afternoon, I went to take some photos of the Anderton Boat Lift at Northwich. I wasn’t particularly inspired by the Lift itself; the light was pretty poor and flat, and there was no definition to the clouds behind it.  With a fence all the way around the Lift, I also could get close enough to take the photos I wanted.

However, across the water from the Lift was this industrial complex which caught my eye.  I’ve started to have an interest in decaying buildings and the swan floating past made for quite a nice image.  Unfortunately, the idiot in me forgot to charge my camera batteries before I left, so I had a very short trip!

At this time of year when we remember the country’s war dead my mind is automatically drawn back to my visit to the Falkland Islands. Two years on from my trip to the South Atlantic, I thought about writing another long blog post about the military history aspects of my visit but after re-reading my post about visiting the battlefields, I’m not sure I can put my thoughts and feelings any better – that post can be found here:

Strangely, after reading so many books about the 1982 war over the years, I didn’t revisit them in the months before my trip. I’m not sure why I didn’t but perhaps it enabled me to take a fresh look at the war when actually being in the locations in which it was fought and when talking to people who were there. Since my return home, I have gone back to some of those books I previously read and I’ve finished many that I hadn’t read before. Having been in the Islands, the images that the words in those books paint are now so much more vivid.

One thing that really strikes me, therefore, in this period of remembrance, is that no matter how hard those of us who have no experience of war try to imagine it and understand what our veterans have been through, it is very difficult to do so. However, actually setting foot in the places where the battles happened and talking to people who were there makes those connections so much easier and stronger.

Not everyone can get all the way down to the Falklands, or even to the fields of Flanders, but in this country we are surrounded by people who have fought or who have been affected by war as civilians, either a long time ago or, indeed, very recently. Taking a moment at this time of year to listen to those who have been through those experiences can only help to aid our understanding and strengthen our remembrance.

There are so many aspects from my trip that will stay with me forever but perhaps the strongest and most poignant memory is of seeing the marker buoy identifying the final resting place of HMS Antelope beneath the cold, dark and wind-blown waves of San Carlos Water.  I was thinking of that spot at 11 o’clock yesterday morning. 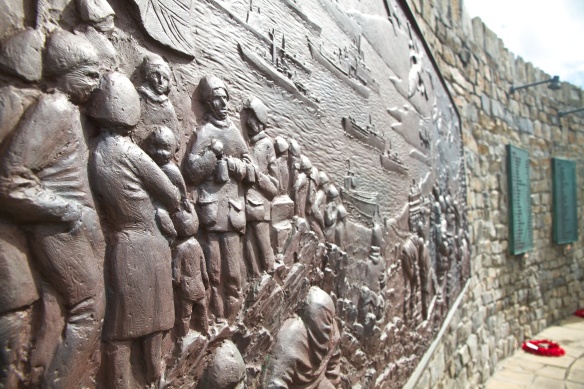 I know my blog is usually about nature and outdoors (except for an occasional Manchester Building) but I had to write this post.

Whilst I have a bucket list for some big things to do, I also have a mini-bucket list for easier things that I’ve never quite got around to doing.  Not far from top of the list was to see Billy Connolly live on stage…and last night I went to see him…and it was everything I hoped it would be!

I first really came across Mr Connolly when his World Tour of Scotland was shown on the BBC in 1994.  His style of comedy fits perfectly with mine – his sense of the daft in normal life, of seeing comedy in the small things and being afflicted by general misadventure – as my grandpa used to say “he’s a good lad but he’s had a lot of bad luck” (I think I’m quoting that correctly!).  Some of the passages from that series have stayed with me ever since – “Hey Billy, you’re like us, you’ve drunk wine in the graveyard!”, amongst many others.

When I heard he was touring again, I simply had to get a ticket (even if I did have to go by myself!). He’s not been in the best of health lately and he touched on that during the gig, in his usually self-depricating way – anyone who can take the p*** out of himself, especially about such problems, is good’un as far as I’m concerned.

As I’d wanted to see him live for so long, it was almost a dreamlike experience, made all the more etherial by his voice. For me, he has the voice of a Glaswegian angel and a way of talking that a grown man could happily go to sleep listening to.  His real magic comes from his approach to comedy – none of these instant laughs or one-line wonders – he’s a storyteller; in fact, a storyteller extraordinaire.  He starts off on one story, and really getting into the detail, but then getting sidetracked onto another storyline and sidetracked again, only to, after quite some time, quite a long time actually, after finishing a few more stories and many laughs, coming back to the original story again and opening you up for another round of laughter.  In some ways, he’s like your Dad telling you a long rambling story when you’re tucked up in bed at eight years old, but with a hell of a lot more f***ing swearing!!!

Not wanting to be mean, I can summarise his performance as ‘his body is weak but his spirit is strong’ – very strong!  Last night was a true Billy Connolly experience but made all the more brilliant by the fact that he stood on stage for two straight hours in an unbroken monologue – truly outstanding!

It’s not just the old buildings that are great… 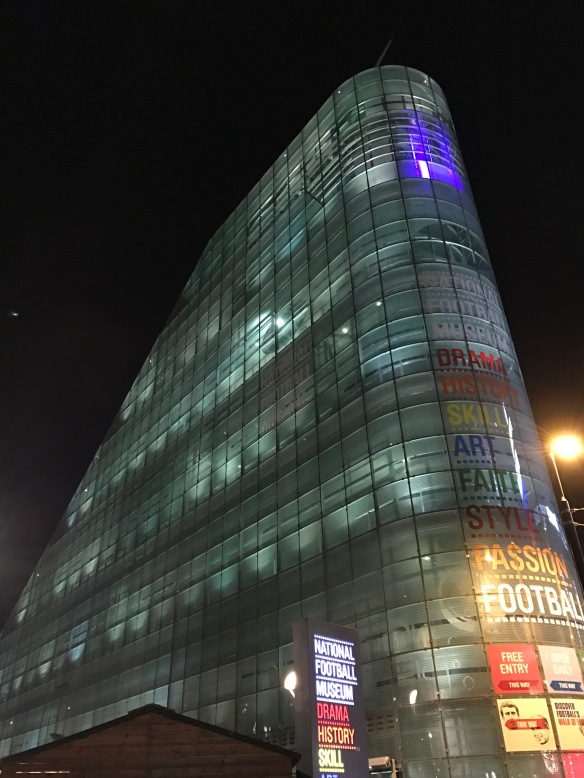 Typical red-brick building in central Manchester – some new buildings are taking leads from this style but others completely ignore it and are bland concrete copies of mid-20th century blocks that have already pulled down.

Knowing it was cold and windy outside, I struggled to get off my sofa this morning but I was glad I did.  I went for a ambling cycle around the local country lanes and came across this large group of starlings foraging in the pasturelands of the Cheshire Plain.