This week has been the most action-packed so far and there has been some stunningly bright and lovely weather.

The week saw the end of a range of surveys including my shearwater response survey and possibly the end of the chough watches although there are still one or two nest sites where we still don’t quite know what has been happening. For the past few weeks there has been an ongoing survey of the auks (razorbills, guillemots and puffins) around the island itself and the offshore Bishops and Clerks. Most of the work has been done from the land by Greg (the Site Manager) and Lisa (the Warden) but this week several of us were able to help when the survey went nautical! There are a number of locations where the breeding sites of the auks can’t be seen from the land so Thousand Island Adventures kindly lends us Ocean Ranger, a skipper and crew, to take us to the hidden spots. I had two trips out, the first at the end of one day which took us to the Bishops and Clerks, and the second early in the morning taking us to the cliffs of Ramsey and the islands immediately to the south. The latter trip was particularly nice given the lovely weather but we did end up getting a bit wet when a large wave his us side on. It has to be said, doing bird surveys by jet boat is much more exciting than my usual sedate wanderings around my own survey sites at home.

I was also given an additional treat this week with another trip on Ocean Ranger when I tagged along on a sailing out to Grassholm. This island is seven miles off the coast of Ramsey and part of the same RSPB reserve. It is home to 36,000 breeding pairs of northern gannets and is the fourth largest gannetary in UK waters. It took a while to get out there but the sights, sounds and smells of the 11 hectare island need to be experienced to be believed. It was unfortunately a very dull day so my photos are quite limited but I wouldn’t have missed it – hopefully not the only trip out I will have.

I also did my penultimate guided walk this week, ably assisted by Alys, the other long-term volunteer on the island this year. She arrived on Sunday and will be carrying on and taking over from me when I leave at the end of July and she will stay until September. I really enjoyed the walk again and the great weather and visible wildlife helped make for a great even.

The week finished with a some unusual visitors to the island when a group of singers turned up for a couple of hours on Saturday. The Hay Shantymen are doing a short tour in the St David’s area and came across to give us a few songs. They are raising money for both he RSPB and the RNLI. I have to admit that shanty music isn’t normally my thing and I was quite sceptical but one of the songs in particular  (Leave her, Johnny) was quite moving – particularly as it won’t be too long until I leave Ramsey. I even got a bit of video…

What I really like about this video is that there are house martins flying around the singers as they come in and out of their nests under the eaves of the farmhouse.

Sunrise from my doorstep… 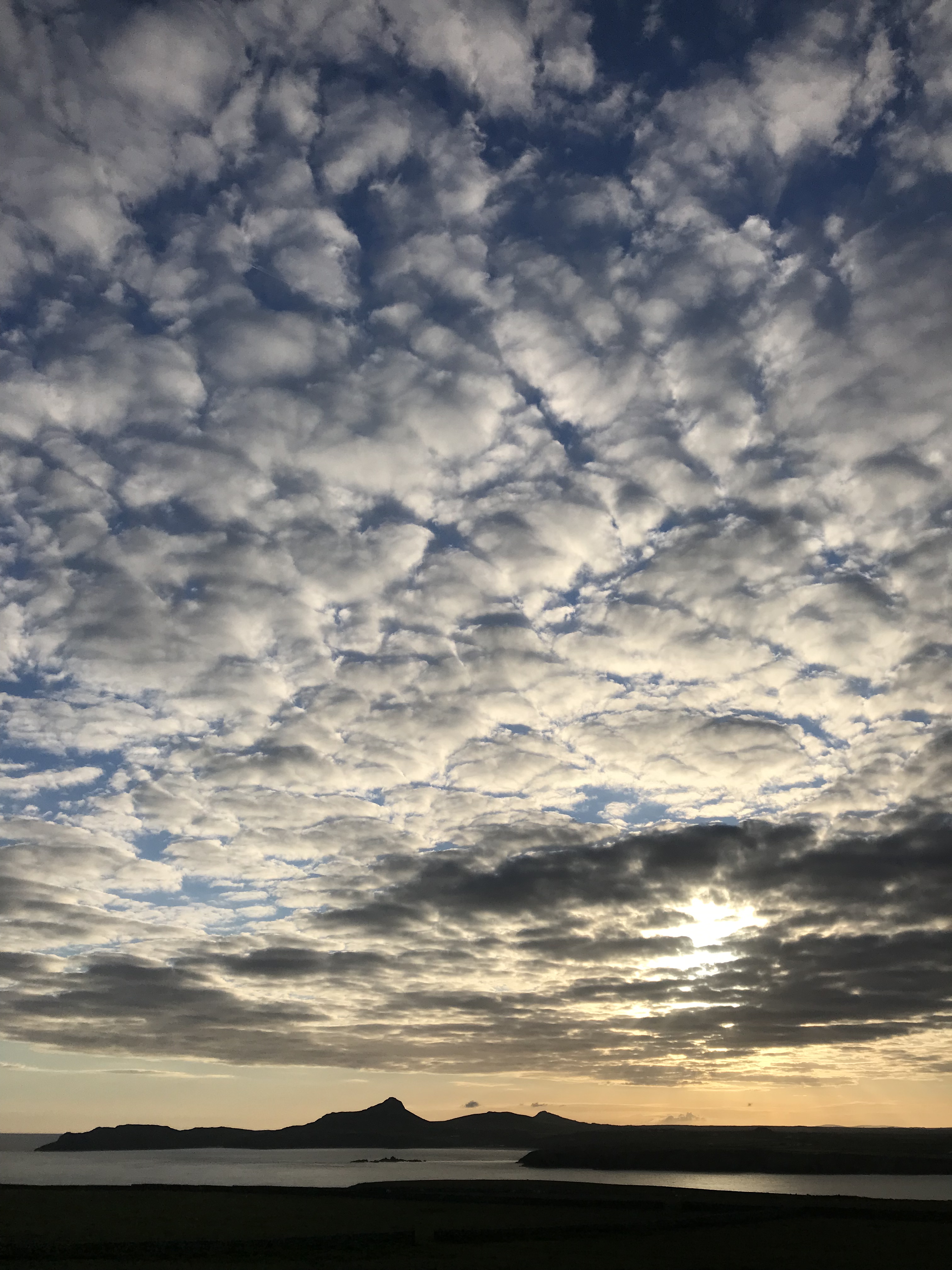 Another week passes and the weather is starting to annoy me now. After the amazing heat and sunshine of last summer I was hoping for a repeat but my hopes appear to be being dashed at the moment. This was another mixed week for boats with several days in a row when they didn’t run. There was much rain and wind, and it really doesn’t feel like summer has arrived at all yet. My first four weeks were quite nice with some warm sunshine, when out of the wind, but the past three weeks have been really quite bad.

The survey and monitoring work continues with the completion breeding bird survey, my Manx shearwater response survey and watching the chough nests. This week saw the first chough fledge and I saw the first one of the lot; it was perched outside the cave at Briw calling to its parents while at least one more sibling was still inside. Since then chicks have fledged from five other nests with more to come, hopefully.

I also started one of my favourite tasks – scything bracken. My first task wasn’t essential to bracken control on the island, but good for us walking around – I cut a path from the Bungalow down to the sheep fields and than out around the base of the hill. I look forward to more!

I had a day off the island, the first in three weeks, to do some food shopping, including buying some crabs – my first spider crab since I was about five or six. It was lovely to see that the verge flowers down the Pembrokeshire county lanes are still in full bloom.

The highlight of the week was jumping on an evening boat trip out to the Bishops and Clerks, the string of islands off Ramsey’s west coast. The sea was quite rough but we had good views of passing Manxies and of puffins and other birds on the islands. Hopefully, more trips out to come!

…from my bed this morning. 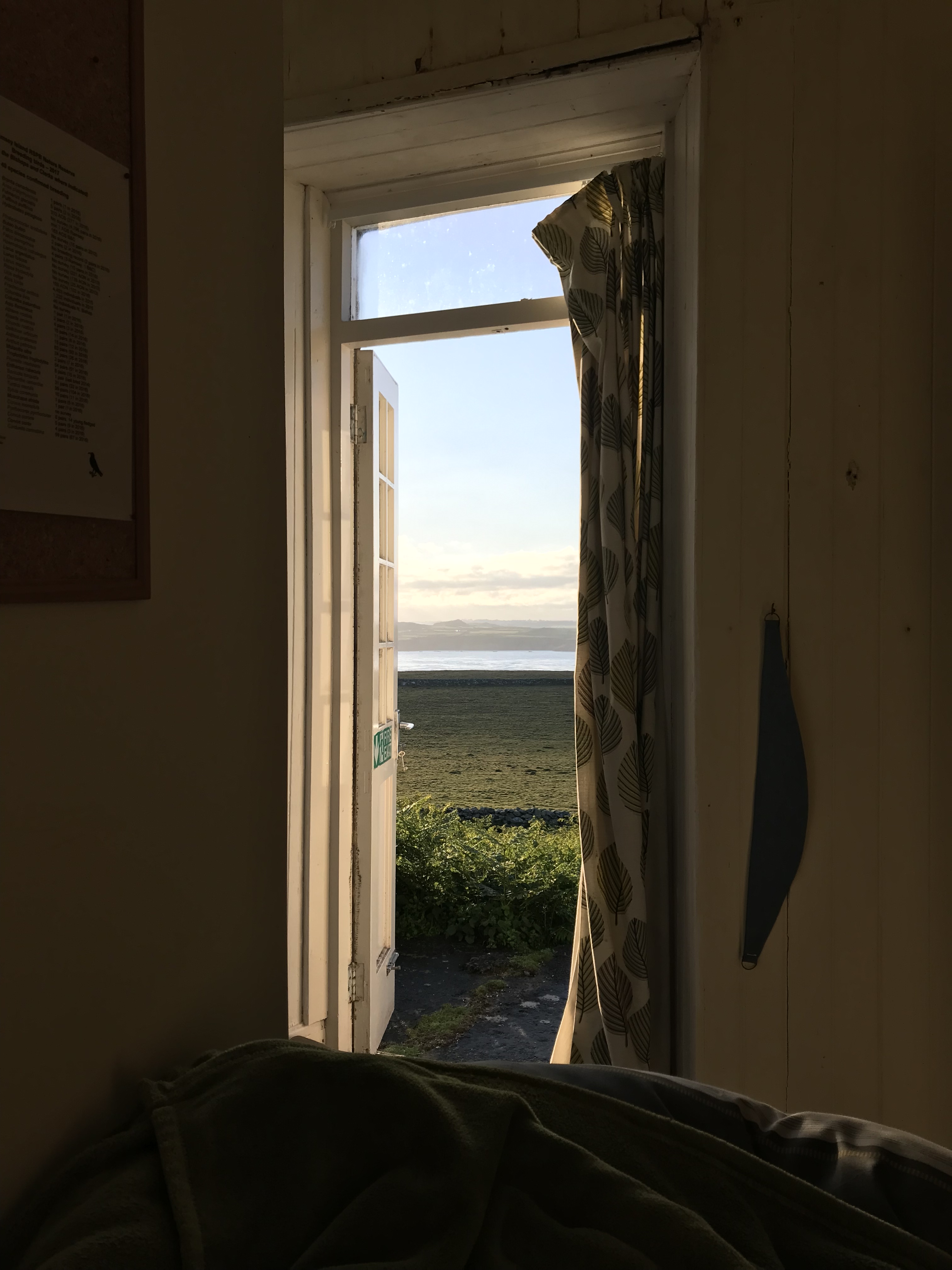 My sixth week has been quite quiet on the island with boats bringing visitors running full services on two days and only one service on another. Much of my time has been spent continuing with my Manx shearwater survey, with another two weeks or so to go, and the odd chough watch. There was some more practical work too with one of the other volunteers and I replacing an old rickety stile at the north end of the island – we found the soil doesn’t go down very far!

I also had a return to office work this week with a morning spent writing blog posts for the RSPB website and writing appraisals of the short-term volunteers. The second post I have written is about the Myrtle warbler spotted on the island last week. The photos of the bird I took are now to appear in Birdwatch Magazine and a Dutch equivalent!

The highlight of the week for me was Thursday’s guided walk. The day was lovely, sunny and warm with very little wind – perfect for showing off the island to visitors. I really enjoyed the three hours I spent guiding the group of 16 around the southern part of Ramsey. The wildlife really helped with the little owl showing well, the chough appearing at the right points and the shearwaters calling back immediately as I played calls down their burrows.

Unfortunately, the bad weather has meant that my four housemates, Dave & Sonia and Peter & Linda, has to leave two days early on Thursday. This left the Bungalow very quiet and I had to wait until Sunday for the next short-term volunteer to arrive.

I’m hoping that the weather for the next week will be much better, as apart from Thursday, the conditions have often felt more like autumn than summer!

I am now well into my sixth week of my stay on Ramsey Island and I’ve only just got round to writing this post about the fifth. As usual it was a mixture of routine and new things to do with more chough nest watches, wheatear surveys and practical tasks. We missed boats for three days in a row and also didn’t have both boats on other days due to the tides. However, there were three very notable things for me this past week…

Firstly, I’ve been given my own ongoing task for the next three weeks in the form of a Manx shearwater response rate survey. Since the island became rat-free in the winter of the Millennium, shearwater numbers have made a significant recovery. In 1999, there were around 800 pairs and this grew to nearly 4,800 pairs by the last full island count in 2016, and there is likely to have been further significant growth since. The next full count is programmed for the spring/summer of 2020 and my response rate survey is the start of the preparations for next year.

Initial survey work is being undertaken on two plots of shearwater burrows, one in the north-east of the island and the other on the western side. The work involves visiting pre-identified active burrows in which the birds nest every other day over three weeks and noting how often a response is received to a recording of dueting shearwaters. This initial work partly replicates the full survey, but on a smaller scale, and provides a basis for generating a total island figure for shearwaters with an understanding of how often a response is received from an active burrow.

So I’ll have my arm down forty or so burrows every other day until late June – a little odd but good fun!

Secondly, I led my first guided walk around the island; the one of five that will be held while I’m on the island. I have assisted guided walks on previous stays on the island, acting as a back marker, but this was the first time I was front and centre leading one. The group of 12 (up to 16 can attend) arrived at 9:30 and I led them first up to the farmhouse and then around the south of the island telling the visitors about the rat eradication programme, little owls, porpoise, chough, Grassholm and its gannets, grey seals, and, of course, Manx shearwaters. I really enjoyed leading the walk despite ‘presenting’ for over three hours, I love telling people about the island and its wildlife. The walk was made all the more fun by having one young boy attending who was very enthusiastic and knew so much about the wildlife. He even took part in my attempts to get shearwaters to reply to playing their calls down the burrows – fortunately we did get a response, eventually.

The last really notable event of the week was the finding of a Myrtle warbler around the farm buildings by a visitor. This was a vagrant from North America blown across the Atlantic by strong westerly winds, possibly last autumn. First spotted around lunch time on my day off, I rushed down to see this rarity and grabbed my camera to take some photos. We spent most of the afternoon watching the bird and it even came within four or five metres, and I got some good photos. Social media went a bit mad and the boat booking office started to get enquiries within minutes. The following morning we had more than 20 people come on the island just to ‘twitch’ the bird; some coming from as far as north Manchester, Oxford and London. Unfortunately, despite it being seen just before the first boat arrived, it didn’t make an appearance for the twitchers and they went home having ‘dipped’ (the term of not seeing a bird when twitching for it) this bird. My photos from the previous day are set to appear in Bird Watch Magazine as part of an article written about the event by Lisa (the Warden) and we have even raised some money for the island by being paid for both the article and the photos.

As the images in a previous post show (one repeated above), the Myrtle warbler is a lovely little thing and when looked at closely is a distinctive bird with quite complicated patterning. This was only third record of one in Wales with the two previous sightings being on Skomer and Ramsey.