The survey at the Wildlife Trust’s Bagmere reserve, on Sunday last weekend, picked up Willow Tits again, so they are probable breeders at the site, and there could be up to three territories.  However, I didn’t pick up any water rails this time, but there are two more surveys to do (in May and June) so hopefully I’ll note them again.

The Blakenhall survey was on Friday, which was a fabulously bright but chilly morning.  There was a low mist across the field as I walked to the reserve and Spring was in full swing with the bluebells now out, or at least on the sunnier slopes around the Moss. 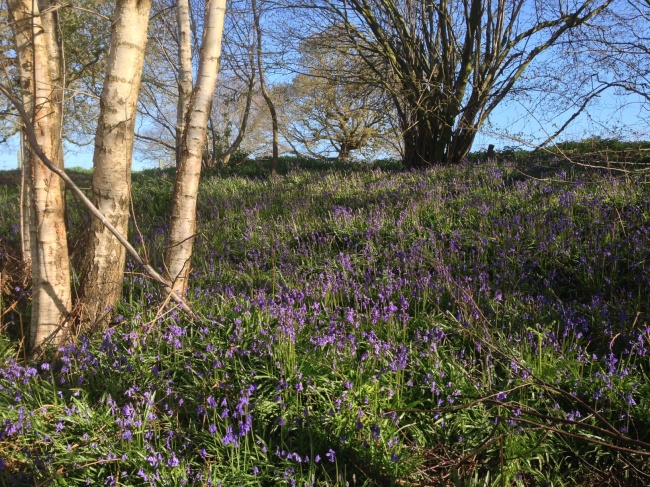 Hearing the bird song was a little more difficult this time as there’s now a mixed flock of greylag and canada geese around the reserve and they were making a racket. The stars of the survey must have been the blackcaps, with eight seen around the site, including a group of three chasing each other around.

Another highlight was seeing a pair of Marsh Tits, which I’d hoped to see last time but didn’t come across them.  Like the very similar looking Willow Tits, they are a red-listed species and have suffered 22% declines since the 1970s, although this is less severe than the decline in numbers of Willow Tits.  They are also a local rarity, so it was good to see them at Blakenhall as part of the survey – I’ve seen them before at the site when doing some conservation volunteering with the Wildlife Trust.

The BTO Breeding Bird Survey is more onerous than the Wildlife Trust version and takes twice as long.  On Saturday morning I did the first of the two surveys I’m doing in the grid square near the Cheshire sandstone ridge, centred around the Bickerton Poacher pub.  The survey requires two (roughly) parallel 1km transects to be walked making note of all the birds seen or heard.  Each 1km transect is divided into five 200m sections and the birds seen or heard are noted within 25m, 100m or over 100m.  Whether the birds were identified by song, call or sight is also noted as are signs and sightings of mammals.

The survey was done on another bright sunny morning and walking around the Cheshire countryside was a real pleasure.  There were no real species of note although the three buzzards circling above the hills were pretty special and I came across a couple of red-legged partridge.