There’s always something nautical happening around Ramsey, whether it be Gower Ranger bringing visitors to the island, the RNLI lifeboats going out on a shout, ferries passing in the distance or yachts sailing through the Sound.  Much larger vessels can also usually be seen from the island and there are often a few moored in St. Bride’s Bay – Ramsey is at the northern tip of the bay.

I’ve got to admit that I’ve had a bit of an interest in ships since I was small, so staying on Ramsey Island gives me an opportunity to indulge in a bit of ship spotting!  The ships moor in St. Bride’s Bay while waiting to go into Milford Haven harbour or to ride out storms; at the moment there’s six sitting out there.

There’s a website, marinetraffic.com, which provides information on ships around the world and enables the ships in St. Bride’s Bay to be identified.

Below is the Stena Clear Sky, a Liquified Natural Gas carrier, which has been sat off Ramsey since I arrived a week ago. 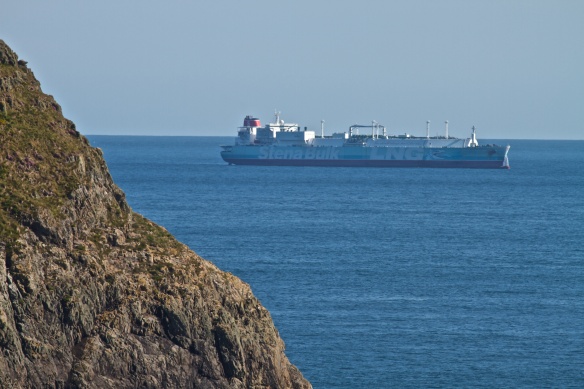 Left to right below are the tankers Ramona, New Conquest and Elisabeth.

Also in the bay ARE STI Mayfair (below, with the island of Skomer in the background) and BRO Distributor, also both tankers.

The ships often come and go at night so there can be different ships each morning, but often they sit out there for a number of days.  There are also some regulars and I have seen BRO Deliverer and her sister ship BRO Distributor before.

Now, I need to get out of bed and see what’s sitting out there this morning!