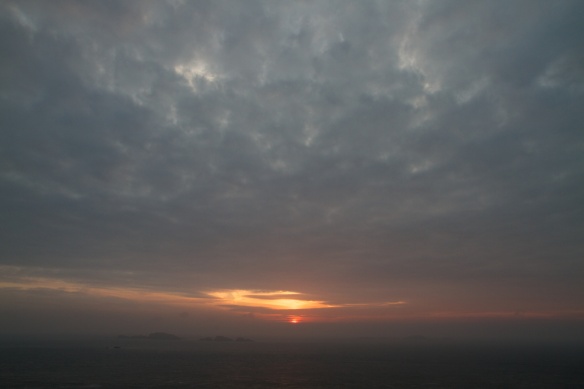 Tonight there was a rather moody sunset off Ramsey Island, with the bright late afternoon giving way to clouds and strengthening winds.  The sunset may not have been particularly remarkable but the scene beneath was.

Looking carefully at the waves beneath the cliffs, a few birds passing close to the water’s surface could just be made out.  Looking even more carefully (I’d forgotten my binoculars), the few birds turned into swarms as hundreds passed by every minute, and closer to land than I had seen previously.

These birds were manx shearwaters, of which about 4,000 pairs nest on Ramsey.  Their numbers have increased from around 800 pairs before rat eradication in 1999/2000.   To avoid predators, shearwaters only make landfall at night.  This is quite tricky at this time of year as the period of darkness is so short. The sound of shearwaters passing the Bungalow at night is one of the most memorable aspects of a stay on Ramsey Island – this  link will provide you with an idea of the sounds volunteers hear when lying in bed at night.

However, these birds were not coming to Ramsey; instead they were likely to be heading to the islands of Skomer and Skokholm, 12km and 17km south of Ramsey respectively. In total, around 165,000 pairs of shearwaters nest on the two islands, therefore, the swarms passing beneath Ramsey’s cliffs this evening will easily have numbered in the thousands, during even the few minutes I was standing watching them go by.

Many people think that long distances have to be travelled around the world to see great wildlife spectacles, however, there are some incredible natural events right on our doorstep.