I wrote this post sitting with my feet up in front of a warming woodburning stove enveloped in a hoody hygga made more nordic by being in a Swedish summerhouse in the middle of the patchwork forest, lake and meadow landscape of Vastmanland. I was there visiting family but I think I would love the place even if they weren’t there – for me the area has a natural magic that has long left most parts of my homeland back in the UK. 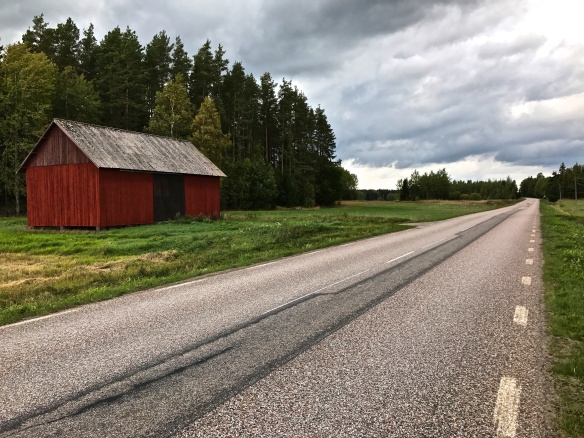 On a couple of days I was there I went for a slow and leisurely cycle around the low rolling scenery, crossing the county border into Dalarna (or ‘The Dales’ in English). At home I can’t go more than a few days without having to head out cycling into the surrounding countryside; if I lived there, I wouldn’t be surprised if I only lasted a few hours before the yearnings for a pedal became too strong to overcome. The landscape of forests broken up by clearings, meadows and small fields, and dissected by rivers and lakes, lack the intensive farming of the lands further south in the country and seem to follow a slower pattern of rural life. The scenes I passed on two wheels are dotted by the deep-red barns, many now well past their best, but also well-kept and equally red farmsteads. These are the typical landscapes of rural central Sweden. 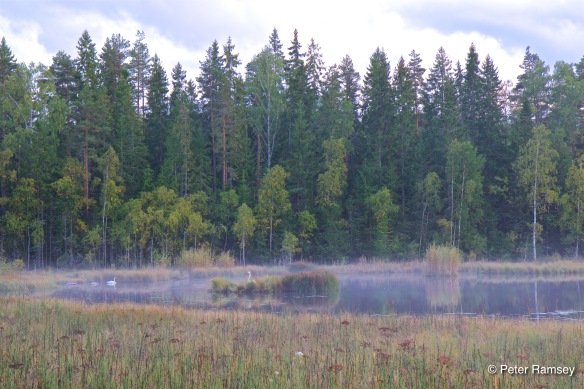 It’s not just the views that lift the soul, the wildlife amongst the forests and fields is rich and abundant. Out on my cycles here, I had views I could only wish for when cycling the country lanes of Cheshire. I was overflown by a green woodpecker, and pedalled past a crane standing alone in a meadow. I spooked some skittish roe deer which went leaping off through the long grass as I approached and a very orange and fluffy fox came trotting down the road towards me, bounding into the roadside forest when he finally noticed my approach. All manner of small birds flitted across my path as I rode on, and the sheer quantity of fungi at the roadside was incredible (and edible). In the fields, were the last of the summer flowers and in the woods there are the final few blueberries and lingonberries still hanging low on the slowly changing floor, from green to copper to red.

I didn’t actually need to leave the summerhouse, however, to see wildlife I’d be very surprised to see in my garden at home or actually the majority of gardens in the UK for that matter. It’s not unusual to have the feeders and surrounding trees visited by a whole range of birds including treecreepers, bullfinches, siskins, great spotted woodpeckers, hawfinches and most lovely of all, crested tits. The lawns of the summerhouse are also visited by fieldfares, slow worms, adders and roe deer. A short walk away is a lake with a breeding pair of whooper swans with two large cygnets and, if I’m lucky, I can get a glimpse of beaver making watery tracks across the surface, starting their nighttime engineering works. 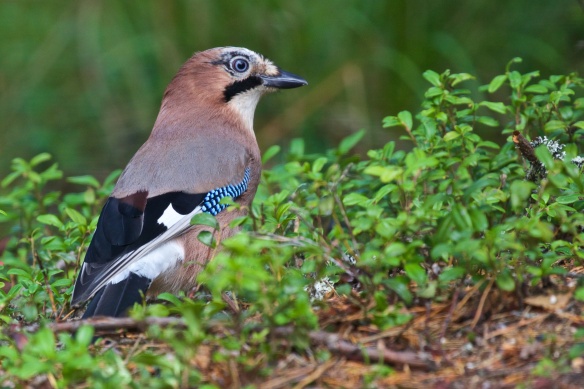 On my pedallings I had time not just to look at my surroundings but also plenty of time to think and compare what is here in the Swedish countryside and what we have at home.

Visiting mainland Europe with Brexit very much in the news, I felt a little bit more of an outsider than I did. However, maybe there can be some good to come out of Brexit, maybe it gives us a chance to take a fresh look at conservation. Maybe we can become a nation of ambitious environmentalism, not just preserving what we have and stemming decline but enhancing and rebuilding our lost nature. Maybe there is a chance to build a future where cycling through the countryside in the UK can be as rich as it is in Scandinavia.

Where do we start on such a path? Well, in my concerned amateur thinking, it has to be farming and farm subsidies. Farming, to my knowledge, has the greatest impact on the landscape and wildlife of our countryside. The changes brought about in farming over the millennia that humans have been growing crops and keeping livestock, have transformed our landscapes beyond recognition from what they were when man first arrived to our islands. There isn’t an acre of land that hasn’t been affected by man and the negative affects seem only to be increasing. Despite the efforts of environmental organisations and their supporters and volunteers, the quality of our rural environment has continued to degrade. It is truly frightening to acknowledge that some of the greatest impacts have occurred over the last couple of decades; a time when environmental concern was already well-established. The increasing intensification of farming, with greater use of land, chemicals, fuel and water has pushed out and poisoned all manner of wildlife and their supporting habitats. Against this tide of industrial food production have been a much smaller band of environmental groups trying to reduce the harmful effects.

Maybe now is the time to reflect on the outcome of all this effort by environmental groups in reducing this harm. Despite some notable successes, cleaner rivers and some species reintroductions, for example, we are still losing wildlife and habitats, and we are nowhere near returning to the quality of environment we had even a generation ago. So perhaps there is a new approach to go alongside a new beginning for the UK outside of the EU.

One approach could be to plan the environment of our country on a landscape wide basis, not just concentrating on individual farms or nature reserves but much wider areas. I suggest the following for consideration; that we plan the countryside, in large areas, according to one of three designations:

The above is just a germ of an idea but one I want to develop further. However, it strikes me that I know one area quite well that may suit such an approach; the Glaslyn Valley. The headwaters of the Glaslyn are up in the heights of Snowdonia where farming, like most upland areas is unviable without significant subsidy, this could be a potential area for rewilding. The floodplain of the Glaslyn would seem appropriate for an Environmentally Enhanced Area, somewhere that agriculture could remain viable with continued support but unlikely to be intensified further without significant additional harm to the environment.

In the title of this post I highlighted autumn as a season of migration, as well as the above mellow thoughtfulness. Well, the start of the autumn migration was more than evident in Sweden; evident in the movement of birds but also evident in the birds that will soon be appearing in the UK. A couple of times I saw large flocks of common cranes gathering in anticipation of the movement south, not to come to the UK but perhaps further south still. I also saw good sized groups of what we in the UK call winter thrushes but are the summer thrushes of Scandinavia; I saw flocks of redwings and fieldfares starting to gather at the end of their breeding seasons, in readiness for the vast movement across the North Sea to the British Isles. Of course, some species have already gone; I’m used to seeing orpreys far more often in Sweden than in the UK but this time I drew a blank. Like the Glaslyn pair and their chicks, their Scandinavian relatives have started their long and arduous journey south, travelling all the way to central Africa to wait out the northern hemisphere winter.

In some ways, this brings to an end another year of the osprey in the Glaslyn Valley, but the year as a whole still has months to go and the winter visitors will soon be returning to the Valley; the curlew and harriers from the moorland tops and the thrushes, geese and whooper swans from far off lands.