One great aspect about visiting a local spot throughout the year is that you can really see how the seasons change month by month. Yesterday in the heat of the afternoon I went for a walk around Wybunbury Moss and it was very much in its spring prime with the birds singing, the flowers blooming and the butterflies flitting about. This was in great contrast to my visit in December when the first snow of the winter had fallen, as the two photos below demonstrate…

Despite the heat, the birds were really were singing loudly and I managed to record nearly 30 species including plenty of summer migrants; willow warbler, chiffchaff, sedge warbler, whitethroat and swallow. There were also signs of the first young of the year with a family band of long-tailed tits flying along a headline and a great spotted woodpecker feeding noisy chicks in their nest hole. 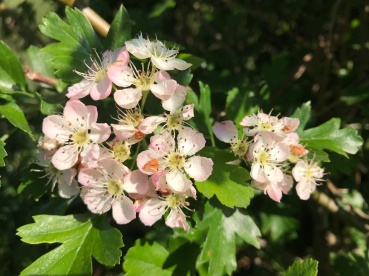 The walk yesterday was perfect spring stroll in a lovely spot full of signs of the season on the type of day I long for on the cold, short winter days.

After a long series of a bright, clear and sunny days, I arrive in the valley under low cloud and while it’s still warm, mugginess has moved in. The strength of the sun has transformed the scenery over the last few weeks with most trees now fully out in leaf but still with the fresh bright green of spring. The bracken and ferns are starting to unfurl their fronds under the cover of the old oak tree wood, beginning to shade out the fading blue bell carpet.

Away from the trees, buttercups have spread out amongst the grass, now growing fast, spurred on by the strong sun. At the edge of the drying ditches the yellow irises have suddenly bloomed while the white of the hawthorn blossom stands out from the hedge lines around the fields.

Lambs in the riverside meadows are weaning but still run to their mothers to suckle, roughly butting her skywards from beneath with some running off to escape their over demanding offspring. In amongst the sheep, white butterflies haphazardly fly over the fields, pausing on the flowers before heading onto the next.

The birds are subdued by the warmth of the day and a little quieter with many now on nests. There remain many calling in the woods and fields; siskin, chaffinch, blue tit, blackbird, thrush, chiffchaff and willow warbler. The wagtails strut amongst the stands of rush and a pheasant breaks from a hidden spot in the undergrowth. A cuckoo calls in the distance but perhaps now less powerfully and with long breaks in its monotonous routine. Swallows have returned and skim low over the fields after the insects emerging under the sun. 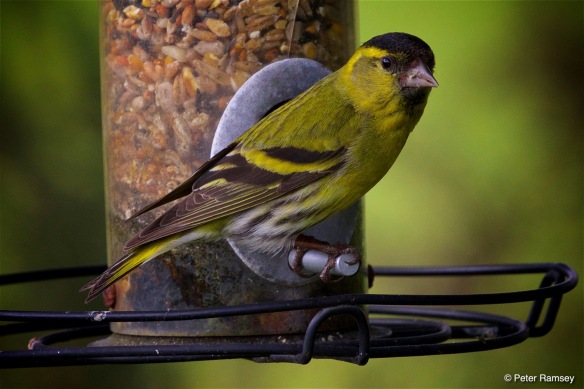 The river is low, perhaps as low as I’ve seen it. The summer-like weather of the last few weeks has  reduced its flow and the level has dropped, revealing some of the rocks at the ford. The plants in the water are growing as fast as those on the land and with less space than they had, they are spreading low across the bed. Small shoals of fish dart from cover to cover, hiding from the keen eyes of the kingfisher.

As my stay progresses the sun breaks out from behind the cloud and the heat begins to build across the fields, river and woodland. The haze remains but the brightness almost hurts my eyes. The wind has been there all the while and now it masks the strength of the rays coming down from above. I move back under cover and the cool offered by the big oak trees by the gate.

In the nest standing high above the meadowland, the waiting is coming to an end. The first of the three large speckled eggs has hatched and new life has arrived in the security of the bowl. Perhaps it will only be three more days until all of the chicks will have broken out. The parents are starting their tireless summer; the male bringing the fish and the female passing small piece by small piece to the chicks. 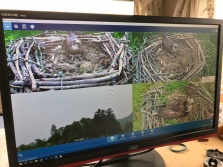 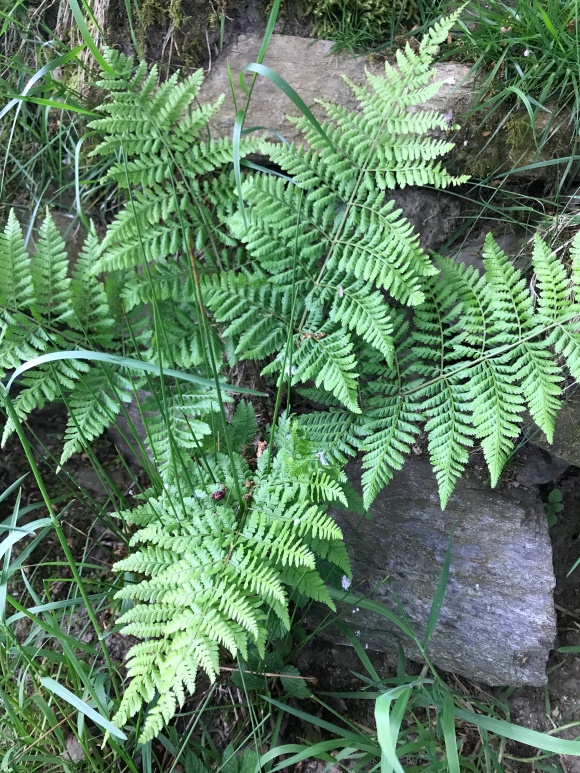 May is the fulfilment of spring’s promise, the dream of those long dark winter days and nights. I really have come to love the spring; for some reason I always used to prefer the autumn but my tastes have changed and I long for days like today. Of all the months, May must be the finest with spring in its prime and all the migrant birds having arrived back. To me, it is now the point when the transformation from winter to summer is complete, where the trees are all out in leaf and it’s almost possible to forget what they looked like when bare of green. It’s also the point when there’s still so much more to come; the heights of the summer are on their way and the new life has yet to be at its greatest.

The osprey season is also well on its way with the first of the egg hatched and the other two not far behind. It’s been a fairly serene season so far this year; yes they were a little delayed in their return but they have settled in well. They do have all their hard work yet to come and the next three months will challenge them as usual but so far so good.

Today was a quiet one at Protection, both ospreys spending most of the day at the nest with only one fishing foray later in the afternoon. The greatest activity came with several dog fights with the local crows, both ospreys taking turns to chase them off talon-first. 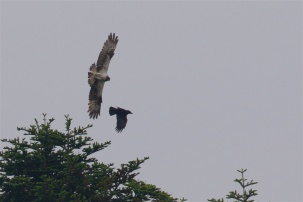 I spent today with Crewe & Nantwich Conservation Volunteers working on some private land at Oakmere. We’ve been going there for three or four years now and have helped to restore a schwingmoor, or quaking bog. Now that we’ve cleared the bog of the larger birch saplings, our tasks are spent ensuring birch doesn’t recolonise and take over again. This is one location were we really can see the difference our efforts make.

The location is also lovely, a lakeside woodland approached through meadows with the bog in the middle. The woodland is full of birdlife and we had great views of young green woodpeckers and listened to the chorus of birds throughout the day.

We finished at about 15:00 after spending the day in the hot sun, so I popped into the nearby farm shop for some ice cream – yum!

Last weekend I had a short trip down to Pembrokeshire for a spring day visit to Ramsey Island and a first visit to Skomer. Unfortunately, the weather got in the way and no boats sailed to Skomer on the first day and I had my shortest ever visit to Ramsey on the second. As always seems the case, it was a stunningly lovely day when I arrived on Ramsey but the weather from the previous day was still having an effect. Two volunteers were being taken across on the 10:00am boat and I caught a lift, only to be told an hour later that all boats for the rest of the day had been cancelled due to swell and I had to be taken off. My small island jinx this year seems to have struck again; I waited a whole week to get to St Kilda last month but failed due to strong winds. 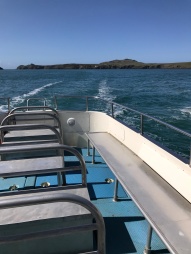 However, there’s more to Pembrokeshire than simply the islands. I went for a wander along the coast path near to Strumble Head. Despite the wind and rain, the spring flowers were putting on a great show with thrift, spring squill, bluebells, cowslip, primrose and gorse all out on the cliff tops. The flowers were also out in the roadside verges and high hedgerows with the red campion particularly abundant. Pembrokeshire is blessed when it comes to the springtime and when the sun came out there couldn’t have been anywhere prettier on that May day. 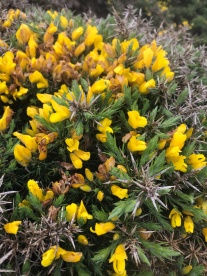 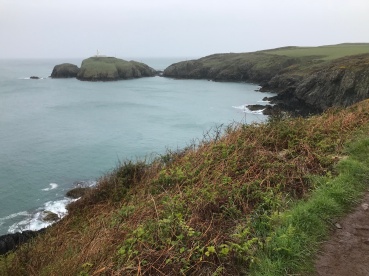 I also sampled more of the local Pembrokeshire food, dining at St David’s Kitchen in the evening, including a plate of Ramsey Island mutton, and had great fish and chips from The Shed at Porthgain – the best I’ve had in a very long time. 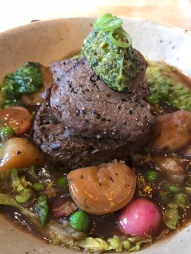 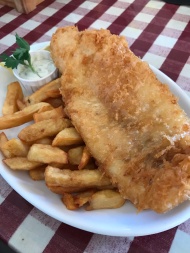 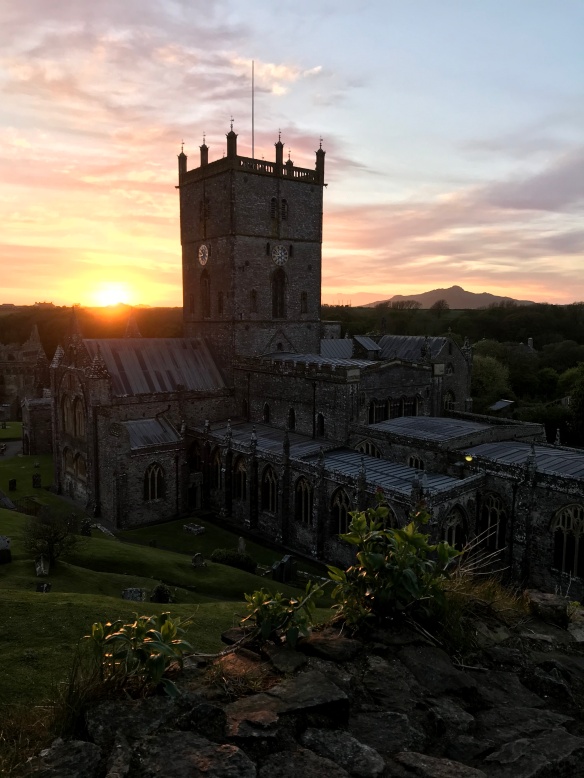 Pembrokeshire really is a hidden gem; it’s like Cornwall, but without the crowds.

Standing on the bridge, the day comes to a close, with the last of the light seeping away behind the hills. The water passing beneath me barely makes a sound, only the occasional ripple over rocks and a fishing coming to the surface for a fly caught in the tension. Almost mirror-like, the river is undisturbed by any breeze, the air lies still and the sounds carry true across the meadows

A crescent moon hasn’t far to run before it dips behind the horizon but the stars begin to take its place, picking out diamonds across the deep blue of the night-encroaching sky. The clearness above that earlier brought warmth now lets that heat flow away, leaving a chill to fall onto the land as mist slowly rises amongst the stone walls and stands of rush.

The barks of farm dogs echo across the valley bottom and lambs bleat to ewes in the growing dark. The last of the evening chorus falls silent leaving only the owls calling in the dark and the occasional trill of the grasshopper warbler. A huge burbling moth bumbles past like a flying clockwork toy while I watch out for bats passing over the water and under the bridge.

As I return to the caravan, the cool of the outdoors is met by the last remnants of the warmth from the sun still trapped inside. Pulling the door closed, the day is finally left behind, the light gone until dawn brings the new morning at the end of an eight-hour shift. I sit down on the bench and the screen on the desk casts a glow across the room. Out there in the dark, but shown brightly in front of me, is a nest high up in the tree above the rocky island in the meadows, an osprey female sat brooding over three speckled eggs. Also out there in the dark could be hands eager to place fingers around the contents of the nest. 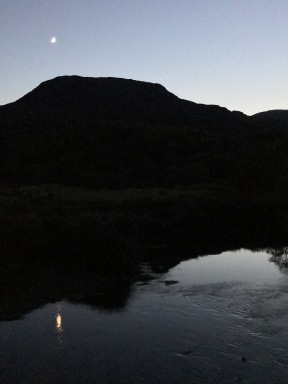 Having watched over the nest for quite a few years now and having witnessed very little unwanted interference, it’s easy to forget that there are still some people out there who could wish it harm. Within the past fortnight a man from Plymouth was found guilty of disturbing a number rare birds nests, including ospreys, and taking three osprey eggs from Scotland. In addition to doing protection shifts at Glaslyn, I also do shifts protecting a peregrine nest in Cheshire and there were three attempts to interfere with the nest last year. Whilst very much rarer than it used to be, it’s sad that there are still people who would rather harm wildlife for their own gratification rather than leaving it alone and getting enjoyment by simply observing from a distance.

I do wonder if Mrs G is starting to feel her age a bit as during my two night shifts this year she has spent more time asleep than I remember her having been during shifts in previous years. I always used to think how tired she must be even before the eggs hatch as she always seemed to be awake and fidgeting about in the nest throughout each night. Having said that, she’s not the only one who seems to find it increasingly difficult to keep their eyes open in the evenings.

The highlight of my shift was the sky; almost cloudless, it gave me an opportunity to try a bit of star photography… 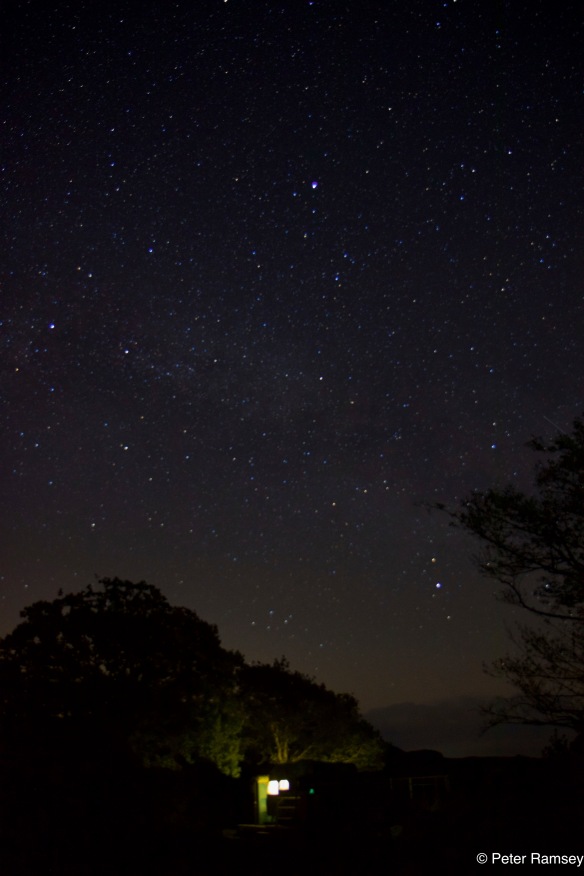