That winding track down through the hillside woodland grows more stunning with every Springtime visit. There is a freshness to the scene; the season of emergence and renewal bringing new life to the old trees. The leaves on the gnarled and moss-blanketed oaks are slowly coming out and the grass is turning a more vibrant shade of green each day. The birds are still singing for their territories but the voices change each time I arrive. This day has a backing of willow warblers and redstarts with an occasional cry of a buzzard circling above the rock studded valley sides. Out from under the canopy and into the open wet pastures, a cool breeze still cuts across the land, dismissing the stone wall barriers and taking the heat away from the Sun’s growing strength. There in the tall fir tree, they still sit patiently waiting for the first cracks to appear in the eggs and the small, ever-hungry mouths to appear. It’s time to rest, as the coming weeks will offer little. 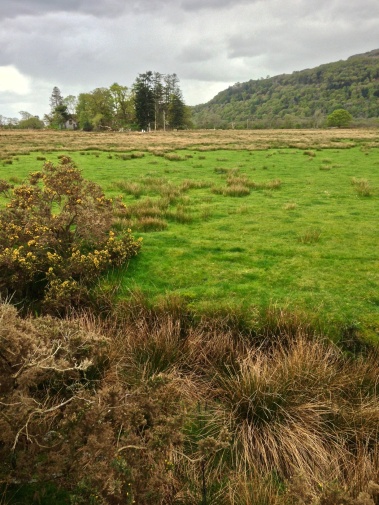 Before my shift started, I took a brief wander amongst the trees, as the bluebells are now emerging and there’s a soft carpet of blue and green under the growing shade of the wooded canopy. There is a dell amongst the oaks and crags in the crown of the small hill behind the site; I could have spent the whole day sat up there but I had to relieve the previous tenant of the osprey protection spy cave and start my watch.

The title to this post may say ‘quiet’, but the diesel generator was on for much of the shift due to the lack of Sun. The equipment in the caravan is powered by solar panels but if the battery reserves fall too low, the generator is switched on. Whilst it does take the edge off the tranquility, it’s a lot quieter than the old generator that we used to have during night shifts – I’m sure even the Ospreys used to cover their ears!

It was an uneventful shift – just how we like them – the ospreys quietly waiting. The sun and rain took it in turns, alternating between warm and dry, and wet and chilly. The only disturbance came from the crows, more chasing and mobbing, the ospreys getting impatient and irritated by their presence so close to the nest.

At about 4 o’clock, the female started calling to the male; almost certainly telling him to get on with his job and fetch her a Saturday evening takeaway. Eventually he took the hint and hopped off down to ‘Port’ to see what he could wrap his talons around. After about an hour he returned, but to the naked eye he didn’t appear to have anything with him – no carrier bag, nothing wrapped in newspaper, no foil cartons, no nothing! However, after a little while, he popped down onto the nest and presented the female with the tail end of a very small fish. She grabbed it, hopped onto the nearby perch and wolfed it down in a couple of minutes – didn’t seem to care about the fish bones! I think he might be up early in the morning to get her breakfast – by the look of that meal, she’ll be hungry – and probably not in the best of moods! She has one of the most scary stares of any female I’ve seen; in fact, second only to my 6-year-old niece!

It’ll be a while until my next shift but by the time I return there should be chicks! Can’t wait!!!