The wooded way is now in the shadow of a vibrant green cloak; the oak trees are out in full leaf. The damp track still has a scattering of the fallen leaves of last autumn but their replacements have brought a richness to the valley, yet to fade to their deep green of summer. A blackbird rushes off in front as I drive down through the woodland; the bluebells are now past their finest and the bracken is starting to take ascendency across the floor. There are a few rain drops in the air but it is not cold and the sun makes a fleeting appearance as I break cover across the wet pastureland. The clouds above make promises of downpours to come and it may be another day in the caravan or forward hide, sheltering away from the worst. While the bluebell bloom may be subsiding, there are other flowers here, with the fox glove and iris taking to the stage. The ospreys are still where I left them but there are now five, not two. The parents are stood alert by their sides as the three growing chicks rest in the cradling bowl of the nest. They have already grown so much; I’ve missed their early days and weeks but with more visits, I hope to see them thrive, from gawkiness into splendour.

There have been significant changes down at the osprey protection site since my last shift back in April. The biggest change of all being that the three eggs have turned into chicks, and they are starting to lose their down and show early signs of producing feathers. There are obvious differences in size between them and the largest seems to take precedence at feeding time but the smallest, and downiest (if that’s a real word) gives as good as it gets during the sibling squabbles.

There has also been some construction work down at the protection site. The old frame that held the solar panels (powering the camera and equipment) has gone and been replaced by a larger and more sturdy structure, with space for additional panels. The ospreys have also been doing some building work but not necessarily to our benefit – with constant adding to the nest, there’s now a stick, upright, obstructing the view of the chicks. Hopefully, the ever tinkering parents will move it soon.

Something that hasn’t changed is the weather, at least not for my visits anyway. There have been some nice spells since my last visit, but as usual, my shift featured heavy rain – please, please, please, can I have nice, warm weather for my next shift?

Also unchanged from my previous visits were the never-ending battles with the local crows, with the female frequently leaving the nest to chase them off, and this time one crow dive-bombing the nest while she was away chasing others.

Towards the end of my stint, the male brought in another fish; the third since the start of my shift at 10:00am. For the first time, I saw the female and male feeding the chicks together. When I say both, I mean she was and he was trying to. The chicks seemed to ignore him, even when he was trying to press food into their mouths and they would turn away and face the female. Eventually, after some persistence, and eating the fish himself, he managed to get one of the chicks to take food from him and seemed to finally get the hang of it. He’s an old hand at this fathering lark, having been breeding in the Glaslyn Valley since 2004; I’d have thought he’d have worked it out by now! 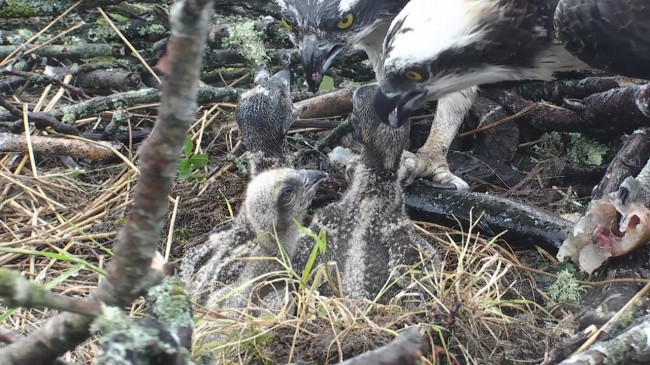