We may only be just past the middle of August but we are five sixths of the way through meteorological summer and the first signs of autumn are starting to appear.

The weather has turned, after two gloriously warm and sunny months in June and July, August has so far been generally cooler and certainly wetter. Gone are the warm, bright evenings with temperatures in the high twenties and we’re now seemingly stuck with days in the high teens or low twenties, with stronger winds and more rain. However, the approach of autumn isn’t just shown in the weather.

On my early morning commute the signs are also there with the sun now not risen as I walk into the station and mists have been quite common across the fields as I head into Manchester. The series of lakes not far from the station that I pass each day had a large flock of geese on it earlier this week. In the gloom, I suspect these were Canada Geese which are an introduced species but they do move together into larger flocks in the colder months of the year.

The migration of summering birds actually starts much earlier than many people think but it is now well underway. For me, this is particularly shown by the disappearance of the swifts; one of my favourite signs of summer. Unlike the swallows and house martins, swifts have only one brood each year, therefore, they make an early departure back to Africa. The swifts from around my house have gone and last week in Lincolnshire I saw only a tiny proportion of the numbers I had seen only a couple of weeks previously. Also in Lincolnshire, I saw the first signs of the trees changing colour and this morning I noticed a few leaves turning brown in the car park I use each day.

Last weekend on a rural wander around the canal near to Beeston Castle, there were more signs that we are coming to the end of the summer with a wide variety of trees and plants laden down with the fruits of the summer – hawthorn, bramble, apple, elder and blackthorn. 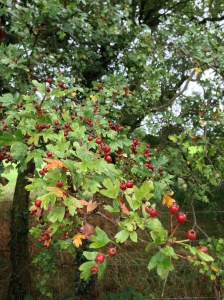 I was getting back to my car, there was also large gathering of swallows skimming low over a meadow, fattening up on the insects in preparation for their own journeys south.

I used to approach summer with a certain amount of dread; spending hot meetings in client’s stuffy offices isn’t always my idea of fun, especially when it’s so nice outside. I also always used to dread the hot and sticky walk across the city centre back to the station on the way home but maybe all the exercise I have taken over the past couple of years has helped to stop me melting in my suit as I turn up at the train. I now love the summer, which is quite a transformation, however, the autumn has been my favourite season for quite a while now and I can’t wait to see what the coming ‘season of mists and mellow fruitfulness’ brings.