Yesterday I had the most fun I’ve ever had on a bird survey – they’re normally tranquil and quiet but not this time!

I joined Greg, Ramsey Island’s Site Manager, and Martin and Liz of Thousand Island Expeditions aboard the Ocean Ranger (a 500bhp jet boat!) to do a survey of the seabirds around the island. 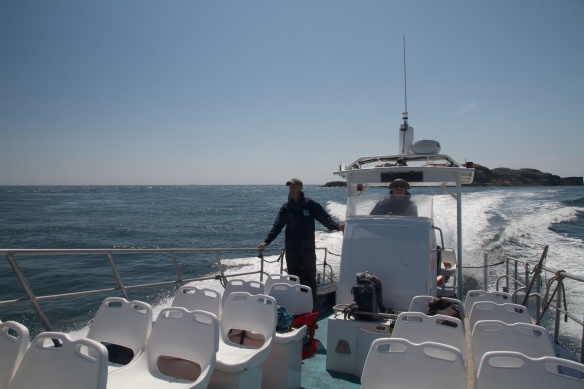 Every few years the seabirds are counted and most of the breeding cliffs can be seen and surveyed from the land. However, there are quite a few places hidden away from sight where the birds have to be counted from the water, so yesterday afternoon was spent out around the island looking up at the cliffs trying to spot razorbills, guillemots, fulmars and kittiwakes on their nests or breeding ledges.

We set off from the harbour, on the eastern side of Ramsey, and went anti-clockwise around the island, finding a few fulmars to begin with. There are relatively few seabirds nesting on the east and north of the island, so we were soon heading round to the west, where the larger seabird cliffs are. We also headed out to the Bishops and Clerks, which are a chain of smaller islands to the west and north-west of Ramsey.

There were plenty of birds to count, although my counting was nowhere near as good as Greg’s but hopefully my photos might make up for it! There were plenty of all four types of bird we were surveying but also loads of gulls and just a few puffins (not including the 200 puffin decoys at Aber Mawr).

As the afternoon wore on the sun cloud cleared and it got quite warm under the cliffs – it’s normal to wrap up warm when out on the water – and I certainly didn’t need my winter jacket in the end. 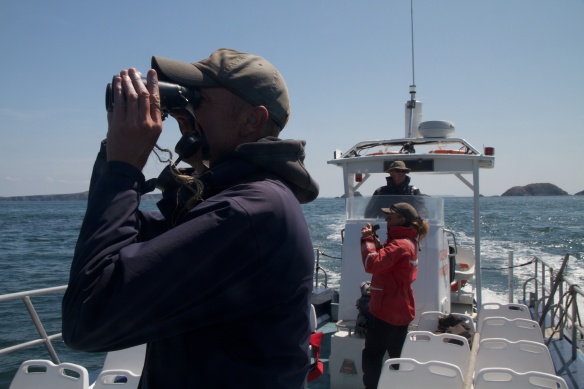 At the end of the four-hour survey, Martin took us for a spin through the Bitches, the line of rocks running out from the east of Ramsey, south of the harbour. The tides rushes between the rocks and there can be a one metre difference in water levels between the two sides. I certainly don’t normally get a free ride on a jet boat when I’m out doing my breeding bird surveys in the middle of Cheshire and they’ll certainly seem even more tame from now on!

1 thought on “Not all bird surveys are the same!”