Before I went on my recent trip to Botswana, there was one particular species I really wanted to see: African painted dog (or African hunting dog). Whilst I was really looking forward to seeing many new bird species and plenty of mammals I’ve never seen in the wild before, it was the dogs that I longed to get a sight of. I’ve had a bit of a thing about wolves for a long time now but I think it might be about dogs in general really. I’ve been to Sweden and twice to Spain to find wolves (and been successful in Spain) and the African equivalent has sparked my interest for a long time. Many people want to see the more iconic African animals but I was particularly interested in seeing these less well-known, rare and elusive canines. In my heart of hearts, I had little real hope of seeing them or if I did, I only expected a far off, fleeting glimpse; I was rewarded with something utterly unexpected and truly memorable. 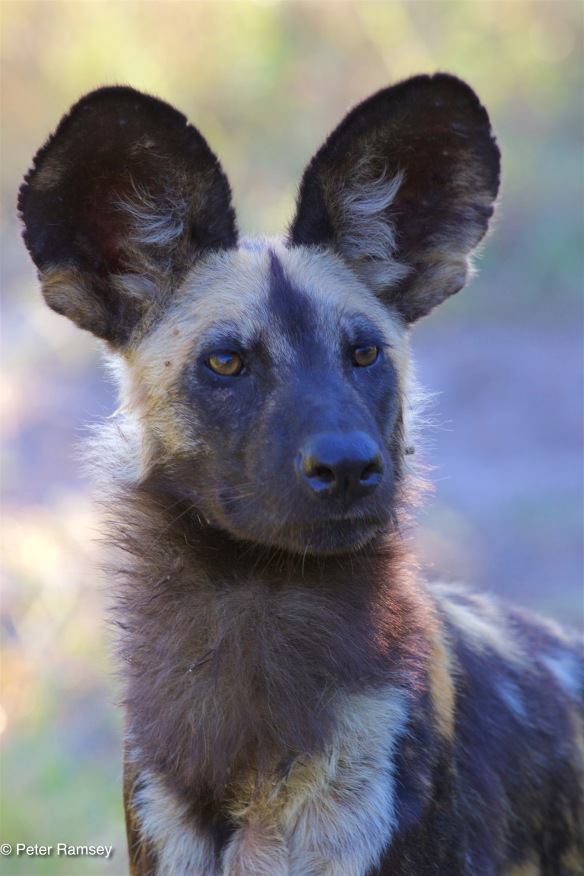 There appears to be some confusion over whether grey wolves are present in Africa with a sub-species of golden jackal having relatively recently been identified as coming from the canis lupus (grey wolf) genetic line. Painted dogs are a canid but are not not part of the lupus line and are an entirely separate species to wolves. However, they appear to me to be typical dogs and have similar social hierarchies to wolves and hunt in similar ways. There are differences though, both in biology and social structure. Painted dogs look very different to wolves and have significantly different dentistry and, opposite to wolves, it is the young females that leave the packs to form new family groups when they get close to breeding age.

As the itinerary for the holiday stated, it would take “a degree of good fortune” to find one of the dog packs in the area I visited but the light of good fortune really did shine strongly on the trip – well at least in dog watching terms. What some may have seen as bad luck had the opposite effect when it came to watching the dogs; the Okavango has had the wettest rainy season since the 1960s and many areas were flooded and impassable while I was there. This did limit the areas that could be visited but also limited the areas that the dogs could be in. Unlike elsewhere in the world where cats hate water and dogs like it, in the Okavango the roles are reversed; the swimming lions of the Okavango are famous. In contrast , the dogs don’t like to get their feet wet and the heavy rains have had a significant effect on them, limiting one of the two local packs to a very small area, made even smaller by a nearby lion pride blocking their exit. I was fortunate that the second camp site I stayed at was right in the midst of the area in which the dog pack was concentrated. 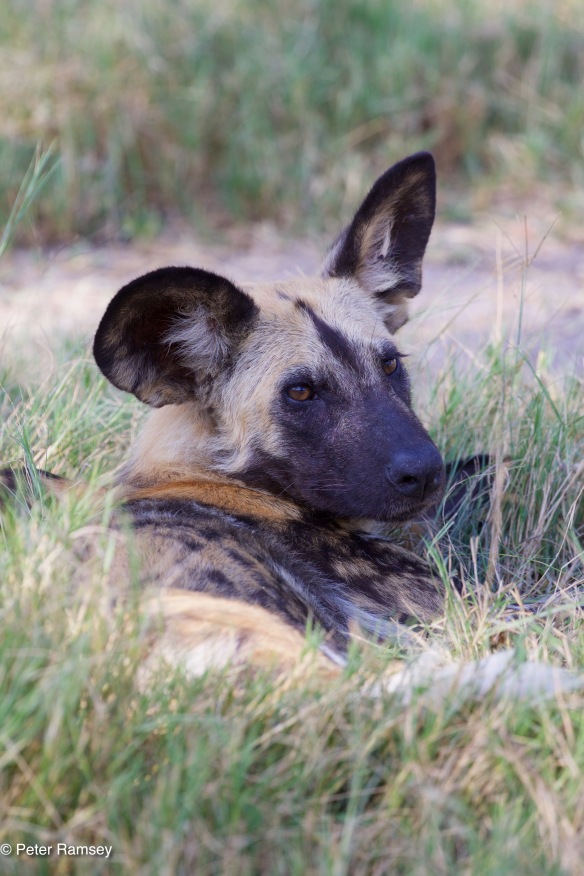 After not seeing the dogs in the first area I stayed, Khwai, it was with amazement that I saw them within a short time after arriving in the second, Moremi. Driving around the area not long before sunset, the time we had to be back at camp (no night driving is allowed in the Moremi national park), one of the group spotted an ear in the grass. As we rounded the corner, we found a pack lounging in the long grass around the base of some small trees taking advantage of the last light of the day. They started to look like they were readying for a hunt as the light began to fail but we had to leave to ensure we were back in camp before dusk fell.

Our next sighting was the following morning when we came across part of the group. The two dogs appeared to be actively hunting and it was a relatively brief sighting as we couldn’t follow them off road. That evening as dark approached and we were returning to camp, we came across two dogs again and when we got the tents we found out that the dogs had been through the camp that day while we were away on a drive. Just before we sat down for our evening meal we could hear the dogs calling to each other and then again later in the evening as I got into bed. The following morning I woke to their calls in the dark and that evening we found the dogs twice in a large open area in the woodlands as we drove around close to camp.

On the last evening we found the dogs in the same spot as the previous evening and spent a bit of time with them as they rested before they headed out for their nightly hunt. There seemed to be up to nine of them but it was difficult to be sure; when they fully lied down in the long grass they completely disappeared, even those only five metres from the truck. Not long after we arrived, two warthogs passed by with the smaller of the two being very wary while the larger one stood its ground. We weren’t sure that they could see the dogs but they seemed to know something was in the long grass; the dogs were relaxed and seemed indifferent to their presence. Eventually, they wandered off and left the dogs in peace but shortly afterwards a large breeding group of elephants passed through the area. They were obviously on a mission to get somewhere in a hurry as they were moving purposefully. Neither the dogs nor the elephants seemed to notice the others’ presence; if the elephants had known they were in the area, there could have been an interesting interaction – elephants don’t like predators. Again, as we returned to the camp we could hear the dogs calling to each other in the growing darkness and as I woke on my last morning in the Botswanan wilderness, I heard them for the final time.

However, we had one last magical glimpse of the dogs and it came not far into our journey to Maun Airport on the journey home. Bumping along the dirt tracks we suddenly came across three dogs busily sniffing around. They then set off as speed in the direction we were heading, so we kept up with them, despite the bumpiness of the track. They would stop every so often and sniff around an area and then set off purposefully again. Two of the dogs seemed quite oblivious to our presence but the third was much more wary and held back from us, splitting from the two in front. This enabled me to get the photo below. Despite bumping at speed along the track in the safari truck, I managed to get this shot without any camera shake. I love the light in the photo, how it picks out the dog’s eyes and the sand being kicked up as it runs along. 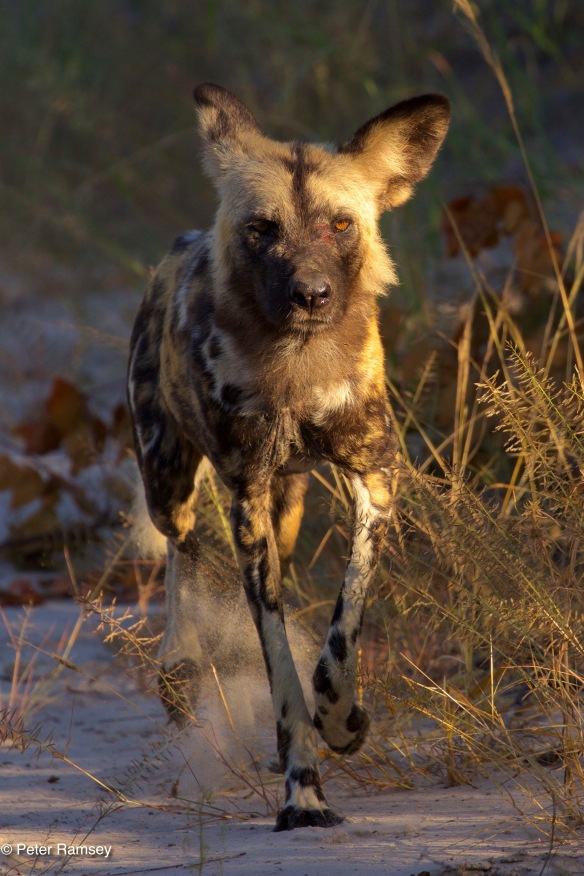 Eventually, the three came back together and sniffed again around a final spot. At a junction of tracks, they finally parted company with us, heading towards the Khwai area where we had stayed earlier in the week and we went off in the direction of the airport.

Seeing painted dogs on six separate times over the course of the trip was exceptional and perhaps unprecedented. After only having fleeting and distant views of wolves, these sightings the painted dogs, so close and for so long, were a truly magical final gift that I will not forget in a very long time. The dogs, the species I really wanted to see, but had no great expectations of being able to, were truly the highlight of my trip. 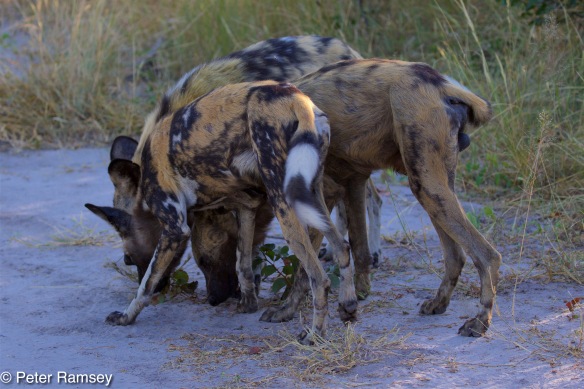