The world has been brought back to life from its long dormant months and rich watercolours of spring are being applied to the once monochrome pencil sketch of the winter valley. The land has burst from its lull and the flush of the new season is washing across the woodlands and fields. Under a clear blue sky the fresh colours are given greater vibrancy as they emerge from the once grey drawn hillsides and valley floor. The scene is wide and open for all to see with the mountains now standing proud, uncovered from their cloak of cloud and mist. The once clawing dampness has been lifted as the warmth is brought back to the land by an ever strengthening sun; but views are deceptive, away from shelter a growing northerly whips away the hope of a perfect day.

Tree by tree and branch by branch the leaves are bringing the wooded hillsides to life. This is not a sudden burst of colour but starts with a series of uneven brushstrokes, slowly picking out new vibrant shades, which gather pace and eventually smother the land in green. Beneath the gradually enclosing woodland canopy, the ground is growing up to meet the sky as the grasses gain strength and the ferns and brackens unfurl their stands. Over the growing richness of the carpeted floor other colours emerge with the bluebells joined by white wood-sorrel and the yellows of the primroses and celandines.

The early new life of the mammals has continued to thrive with the badger cubs making their first forays out from the safety of their set beneath the oak tree. In the old rabbit warren, the fox cubs are also emerging from their den and the riverside holt of the otter has welcomed new kits. In the warmer evenings there are the first stirrings at the back of the abandoned barn as the bats take to the wing to feed in the insect-filled air.

The last of the winter visitors have moved north for their chance to breed in longer hours of light. The whooper swans are making their way up the coasts until leaving land far behind and embarking on their strenuous journey across the wide open ocean to the land of ice and fire. The winter thrushes now turn to spring breeders in their other homes across the water in the Nordic lands and the opening year mass spectacle of starlings is over until the nights draw in again. The lowland visitors no longer bide their time and have returned to their upland breeding grounds with the curlew making its evocative calls over the moorlands and the hen harriers sky dancing in the air above.

Whilst the sights of the winter visitors fade into memory after another season’s close, the influx from the south marks the next season’s opening. The arriving waves of avian life join the residents in bringing new energy to the landscape. In amongst the greening woodland branches the willow warbler, chaff chaff and redstart are all claiming their territories after their long journeys north. They join the others, the great tit, mistle thrush, blackbird and blue tit, all calling out their claims. The first swallows skim low across the damp pastureland as the meadow pipits wander between the clumps of thick rush below. The wrens sing piercingly from their hidden stands and the chaffinches chirp in amongst the riverside undergrowth while the wagtails make their bouncing flight from fencepost to gatepost. The insect life is growing too with the bees moving between the great masses of yellow coconut-scented gorse blossom and the dragonflies busily hunt above the slow moving stream. High above the woods and damp meadowlands the buzzards are calling to one another and the heron floats lazily past, skimming over the treetops and dropping down to the water’s edge.

A first white brown-speckled egg of the year lies deep in the bowl of the large nest at the top of the fir tree across the pastureland and a pair of ospreys have once more started their long watch while they wait for the arrival of new chicks to the Glaslyn. 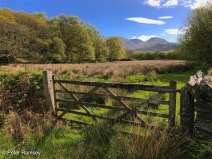 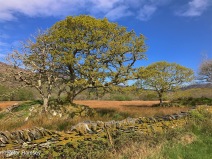 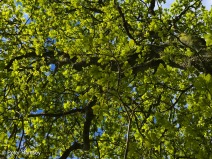 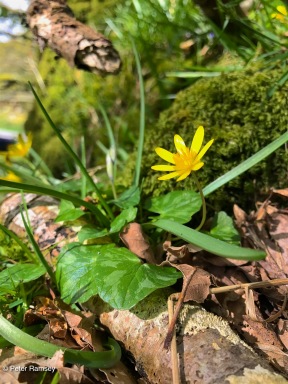 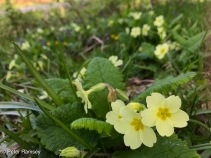 My first protection shift of the year was very unusual in that it was accompanied by bright, clear blue skies and a strong sun. Anyone who has read my blog posts before will know that I’m often ‘blessed’ with plentiful rain during most of my protection shifts, particularly at the early stages of the season. The weather wasn’t perfect, however, as the warmth of the day was reduced markedly by a strong northerly wind but in shelter, away from the wind, it was lovely.

The early part of the shift was fairly quiet. There was an intruding osprey as I arrived at 10am but little else happened for the rest of the morning and early afternoon. After spending that time out in the forward hide, I returned to the caravan (and its live TV screens) at around 2pm. I’m no expert in osprey body language but when I started watching the screens, I thought the female osprey, ‘Mrs G’, looked a bit uncomfortable and rather than lying in the nest cup was slightly crouching over it. Over the space of a few minutes she shuffled around quite a lot and kept looking towards her rear. She then stood up and the camera, controlled from the viewing site, zoomed in beneath her to reveal not one but two eggs. Not only was I fortunate with the weather today and I had an egg delivery too!

Despite the chilly wind, I ended my shift in my favourite spot, sat on the bridge, dangling my legs over the stream below, watching the water pass beneath – lovely.

1 thought on “A sparkling spring day in the Glaslyn Valley”