As I get out of my car at the end of the wooded track, a hush has descended across the open valley. The air is warm and still and the murk of the low grey cloud lies heavy over the land. The quietness of the place gives it an atmosphere, like I’ve invaded the private world of the wildlife and plants. There would be silence if it was not for the birds; the dawn chorus appears to have lasted well into the mid-morning and there’s a whole avian choir singing in all 360 degrees. There is young life in abundance with great tit and robin fledglings, all calling to be fed, and the wrens shout alarm as they wait to enter their nest, beaks full of insects. The real herald of spring is here too; the cuckoo calling first at distance and then close by. The signs of the season have been clear in the valley for weeks but this is now spring in its prime. High up in the fir tree, the chicks have grown so much in just one week; they still have growing to do but they have already come so far. 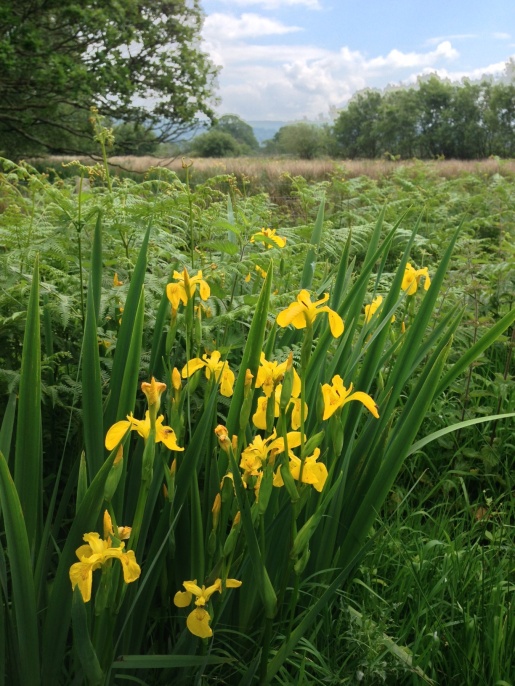 The valley scene has not changed dramatically since my last shift but the plants are continuing to surge upwards; the bracken is becoming more dominant, the irises more plentiful and the flowers of the foxgloves are opening further up the stems. As the blossom of the gorse has died away, the bramble is starting to come into flower; hopefully to provide another bumper blackberry crop this autumn.

As the morning moved on, the wind picked up and blew the clouds away to reveal a bright blue sky and warm summer sun. In fact, today is the last day of spring (meteorologically speaking) and it has been a fine one. Yes the weather forecast yesterday said it had been one of the dullest on record but the Glaslyn Valley has been in its splendour – what will the summer bring?

The birds really were on top form today and I recorded 31 species over the course of my eight hour shift. The redstarts, wrens, willow warblers and chaffinches dominated with their calls but others made their presence known. The osprey battles with the crows are still ongoing and the buzzards have been close by too. The pied wagtails nesting just up the track have been taking insects from the drystone wall and a mistle thrush has been calling angrily around the site.

I did a long dreamt of thing today; I sat in the warm sun at the protection site – It may seem like a little thing to most. I think this little corner of north Wales is a hidden and quiet oasis and I love to spend time there but over the course of the past three springs (and over 30 shifts – many at night, to be fair!), I have yet to have this pleasure.  I’m sure the sun shines on the valley quite a lot but my shifts seem to coincide with rains and storms; so today was a bit of luxury.

Before I packed up for the day and made the long, but enjoyable and scenic, drive home, I went down to the river…

Standing on the bridge, staring down into the river, the water crowfoot and rich grasses wave in the current, like breeze blown stands of wheat.  A bee passes close by, humming as it bumps from flower to flower. The strong sun, not far off its yearly peak, brings a tingling warmth to my face, only slightly cooled by the passing breeze. The trickling water runs beneath the concrete slab and the mirror-like surface is only lightly stirred by the air flowing above. The crisp blue sky is reflected back towards the clouds but the crystal clearness grows as the river nears the arches. Above, a wren calls from a stand on the gorse and bramble covered stone wall, while below, shoals of small fish dart from cover to cover, momentarily wavering in the faster flowing water.  A redstart continues its chattering from the tree top, joined by the willow warbler and the blackbird, early for its dusk vigil.  The scent of tanning skin and drying grass mingle in the fresh air drifting in from the coast. The low bleating of the ewes and lambs go almost unnoticed, unlike the cuckoo announcing its subversive intentions.  I stir from my stance above the water and, begrudgingly wander back to my car. 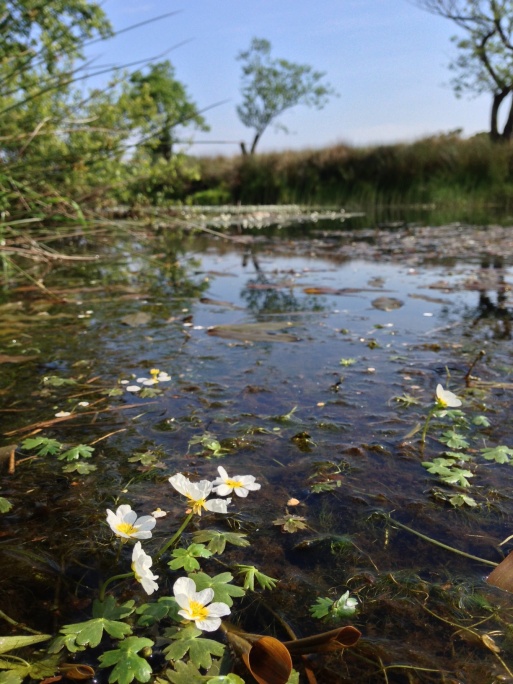