Pulling the door firmly closed behind me, I leave the cottage and am buffeted by the keen wind as I move away from the shelter of the building. It was warm inside but now out in the open there is a chill and the breeze cools me as I make my way down the gravel drive to the narrow single-track road. I cross to the gate, lifting the latch and pushing through, closing it behind me again. Down the grassy slope alongside rows of headstones spaced across the short-clipped lawn of the graveyard. All around the gulls are crying their screeching calls, chasing each other and playing in the turbulent air. I approach the second gate, going through, but struggling to close it properly, the two parts not lining up until finally the metal clank of the latch slots into place.

I’m now out onto the dunes, pale, almost white sand held in place by tall stands of beach grass. In amongst the rolling hills are two grazing ponies, one grey, one white, their long pale manes and tails being gathered up by the wind. One looks up as I pass but it soon returns its head to the grass, pulling another mouthful and slowly chewing away. The going is soft but down a slope I’m soon onto firmer ground of the beach. There is crunching beneath my feet as I step on a shell-covered surface and I have to shade my eyes as the sand blows across the flat open expanse. I turn away and make for the headland with my back to the onrushing wind. Out here, the sands are of differing shades, yes, there is the pale cream and white but there is also steel grey and black mingled in amongst. The wind has created swirling patterns from the different shades, a myriad of shapes set only for a few hours before they are covered by water and eventually renewed with different patterns.

The tide is on its way in but it is slow running and there is still an hour or more until it is at its height.  Depending on the day its waves can break all the way up to the base of the dunes or it can fail to take away the footsteps of the day. As the water spreads across the low flat sands, piping oystercatchers stand as its edge, gradually moving closer inland as the waves slowly make their way towards the land. Sanderling and ringed plover also forage at the water’s edge, scuttling to and fro with the movement of the waves. They take to the air as I approach and drop down a little way further along the beach. They lift several times as I make my way along the water until eventually tiring of my presence and arching around me to move back to where I first met them.

The footing is firm down by the water, the sand made solid, some of it rippled, some of it smooth. I turn past the headland and the wind drops, the waves take over as the dominant sound; this part of the beach is met with strong forces of the sea with great breakers rolling into the sands. A large log is being rolled up and down as each band of rushing water meets the land. The bark has been stripped away and the revealed wood has been worn smooth by this same action over uncounted days.

Behind the beach, the land rises steeply to a peak and as the air rushes up the face of the mountain it condenses, creating great billowing clouds that trail inland. With the light from the dipping sun shining orange on the slopes, the land looks to be alight with flame and plumes of smoke.

Looking out to sea, Taransay looms large but further behind are the great hills and mountains of North Harris, a line of splendid peaks spreading off into the cloud-filled distance, their summits obscured. The sea between me and the far off coast is simmering with the wind, white water breaking away from the beach. As the waves peak, momentary glimpses are seen of rafts of duck, scoters and long tails floating out the winter in relative shelter of the great bay, their calls occasionally being brought inshore on the wind. I listen out for the wildest sound, the divers, but there are none to be seen or heard.

As the sun drops slowly behind the off-shore island, the shadow creeps up the beach, turning the steel shaded sands to a deepening blue and the gold into caramel. Finally, even the top of the peak it unlit and the darkness creeps in, brought on more quickly by the gathering rain clouds. There is one last pattern in the sand amongst the prints of man and dog; unseen a wilder animal walked along the beach, an otter searching along the water’s edge, gone now but its feet and tail gave it away.

I turn for home, up the narrow stream-bottomed valley and up and out into the open, past the small lambing fields. There are the first drops of moisture on the ever strengthening wind and I have to walk more purposefully to counteract the gusts. Eventually, I come back to the view from the cottage, overlooking the cemetery and vast sands beyond. 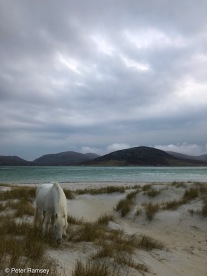 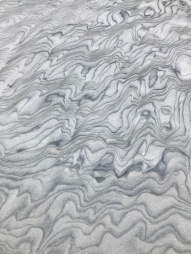 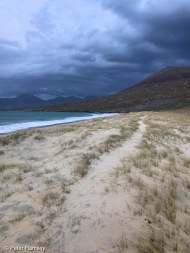