Scapa Flow is such an evocative name, one that conjures up visions of freezing, dark and windswept waters surrounded on all sides by bleak, cold, low lying islands. It brings visions of sunken ships in the deep and rusting hulks in the shallows and of waves crashing against rocky shorelines battered by storms. I have imagined it as a deserted place, as a place of the past, of former glories, once at the centre of a time but now a place more of history than the present.

With the history I know, it has sparked an interest in me for some time and it is one of the main  reasons why I wanted to visit Orkney. Across most of the UK there is little evidence of the two world wars, with the exception of fighter and bomber airbases and some remaining coastal defences but Orkney is one of the best places to see this part of our history in the flesh (well concrete and metal).

Scapa Flow is one of the greatest natural anchorages in the world and being so far from the European mainland, it was the obvious choice to be the home of the Royal Navy in both world wars. Some major events happened at Scapa Flow with the two most infamous being the scuttling of the German fleet in 1918 when it had been surrendered at the end of the war and the sinking of HMS Royal Oak by a German submarine in October 1939 with the loss of 833 men. There is little visible evidence of these two events now but on the islands surrounding Scapa Flow there is so much more to still be seen, left over relics of both wars.

The largest remains from Orkney’s wartime past are the Churchill Barriers, the manmade causeways built at the beginning of the Second World War to reduce the number of navigable entrances into Scapa Flow. They now form the roads that link Orkney Mainland to a string of islands to the south east; Lamb Holm, Glims Holm, Barray and South Ronaldsay. Originally, block ships had been sunk in the narrows between the islands, some can still be seen, but at the beginning of the Second World War, many had fallen apart and this allowed the submarine to enter Scapa Flow and sink the Royal Oak. On the orders of Winston Churchill, then the First Lord of the Admiralty, permanent concrete causeways were built, with roadways laid on top.

During both wars, other major defences were built on the land surrounding the harbour with gun positions, watch towers and search light positions built along with the accommodation for the troops operating them. Much of these defences are still evident all around Scapa Flow itself as well as on other islands. There is also evidence of a number of airfields built to protect the harbour and islands from areal attack.

On one of the days I was in Orkney I visited Hoxa Head on South Ronaldsay where there still stands much of what was one of the main defensive positions; this one protecting the southern entrance into Scapa Flow. There are remnants of both First and Second World War defences with the latter being very well preserved. There is a good walk around the Headland which takes in all of the former military site and it’s well worth going. The photos below hopefully put across the stark beauty of the place and the sense of history. 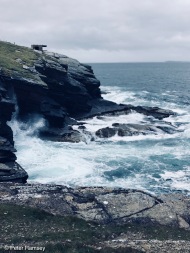 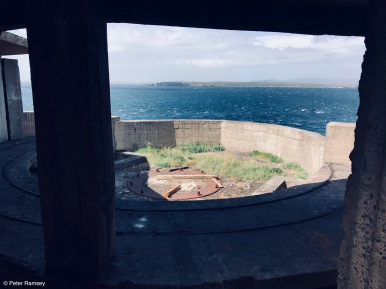 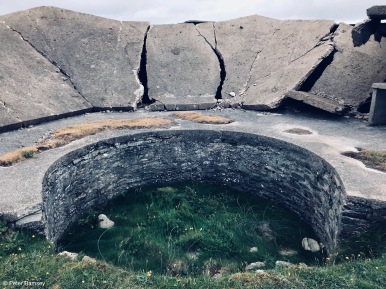 Just to the north of Hoxa Head is the Italian Chapel on Lamb Holm. This was built by Italian prisoners of war who converted two Nissen huts into their own place or worship. The Italian’s were held on an airfield and during their time in Orkney were used as labour to build the Churchill Barriers. 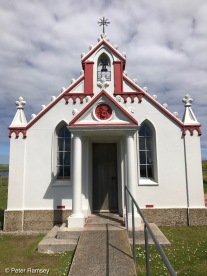 Elsewhere in the area it is possible to see more evidence of the Orkney’s nautical history.  With its numerous islands and rocks, and challenging weather, Orkney is the last resting place of many unfortunate ships. One such wreck can be found on the east coast of North Ronaldsay, just south of Grim Ness Head. The Irene, a Liberian-registered cargo ship, ran aground on the night of 17th March 1969 after drifting inland in a storm. All of her crew were rescued from the shore but in trying to provide assistance, heading to the wrong location, the Longhope Lifeboat, TGB, capsized with the loss of all eight of her own crew. There is still a lot of evidence of the Irene on the shoreline with the much much of her hull gone but her boilers left behind alongside other major structures.

Orkney has its history in plain sight and much of its 20th Century military and nautical history is quite spectacular and set in stunning locations. In addition, like many of the Scottish islands, Orkney also has a huge range of sites from history well before the 20th Century and while I visited some, there is still so much more for me to see. To learn more, Stromness Museum is also well worth a visit.