Yesterday I made the 20-minute train journey down to Stafford to go to the town’s beer festival.

Small but well-stocked would probably best describe it. The festival had been running from Thursday so I expected when turning up on Saturday afternoon, the last day of the event, that there would have been a shortage of beer. However, unlike other beer festivals that seem to start running very low remarkably quickly, there were very few ‘sold out’ signs when I left at 7:00pm (despite my best efforts!).

The school sportshall in which the festival was held was nicely laid out with local beers, and perries and ciders, on one side and national beers on the other and plenty of leaning posts in between.  I got stuck into quite a few, favouring darker beers as usual, but there were also some nicer best bitters and lighter, more summery brews – although the 10% bitter I tried last would tempt me back!

The music made quite a change with a local brass band playing for much our the afternoon.

The only bad thing about the event was the weather – nice, warm and sunny – so it seemed a bit of a pity to spend the day inside.  However, this might be another event to keep in my diary for next year.

After having a good time last year, I had to go to this beer festival again.  This year, it was at Manchester Central (formerly GMEX) and while not as spectacular as last years’ venue (the velodrome) it provided a larger space for this huge event.

Again, I visited on the last day of the festival but this year I was disappointed that some of the beers and breweries I wanted to sample had already gone – no Purple Moose, no Isle of Skye and only one Adnam’s.  The food was quite poor too, compared to last year, with the venue providing the pretty average nosh – what’s more there was no cheese, again! 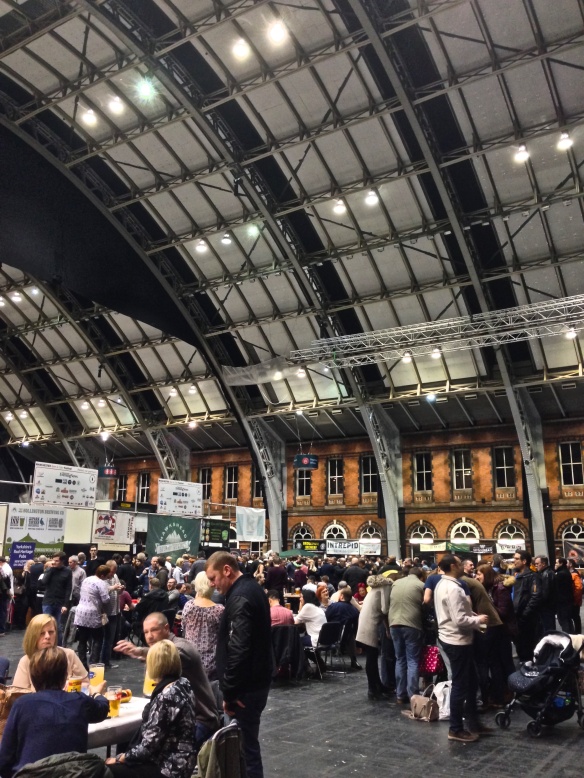 Well, apart from a few supply and food grumbles, an afternoon spent sampling different beers is never one wasted – and I even won a prize on a pub game (first time for everything).

Will definitely be back again next year.

Last weekend I went to the Manchester Beer and Cider Festival at the Velodrome.  A winter visit to a beer festival is starting to become a bit of a tradition and spending a day in the warm, drinking good beer with a group of mates makes a change to getting wet and cold outside doing conservation-type things!

I particularly like beer festivals in great venues and they don’t come much more spectacular than the Velodrome – especially with practice sessions going on most of the day.  Some of the bars we around the outside of the track but the main event was in the middle – reached by a tunnel under the boards.

I went on the last day of the festival but unlike last year in Derby, there were still plenty of beers left.  I was particularly excited to try my first draught pint of the Purple Moose Brewery’s Dark Side of the Moose.  After having had many a bottle of this fabulous beer (after getting some freebies via volunteering at the Glaslyn Osprey Project – it’s made locally in Porthmadog), I’ve had to wait ages to have my first proper pint of it; I wasn’t disappointed!

However, I was disappointed by the lack of cheese – at the event in Derby last year, I bought a big cheese platter (and had it all to myself!) but this time there was only a pretty poor looking ploughman’s stall.

Now I need to find another festival to go to at another great venue.